Fun in the sun

On Tuesday I left the frozen tundra known as New Hampshire and struck out to find a warmer, sunnier, greener place.  This also happened to be the place where about 450 of my colleagues were gathering to share our skills.  Or get drunk at a Disney resort and make fools of ourselves on a corporate provided dance floor.  Which ever.

The summit went about as expected.  As one of the advanced analytics people, I taught, led teams, and had more people than I could ever track ask me for help or to take on a new project.  Fortunately, they all have to ask my manager to be put on the wait list and it's not my problem to sort them all out.  I just make the numbers dance.  I didn't do a lot of learning, but that's okay.  When all of my work with slide shows and manning the trade show booth were done, I got to kick back and relax at the Gala the leadership team had put together.  Good food and an open bar?  Followed by a DJ?  Um, yes please!  Except the DJ part.

Let's just say that the analytics team was the group of data people at the back table cringing when the DJ started picking out volunteers for lip synch.  I was entirely ready to throw our newest college hire out in front of the line of fire to defend myself.  We bolted as soon as the required festivities were done (and the bar closed).  Data geeks don't tend to be big party animals when surrounded by hundreds of strangers.  The market development team partied for hours and showed up late and hung over for the last meetings of the event.

Since I wasn't hung over and partied out, I decided to spend my extra day experiencing this whole Disney thing.  I spent a couple hours at Epcot during the work event, but it was raining and the ride I really wanted to try was closed.  Mission: Space was great, but not the best on my stomach.  I bribed my body with some food in the France part of the park and realized there was absolutely nothing to do in Epcot but buy overpriced food and souvenirs.  Fail.

I sampled the cuisine. 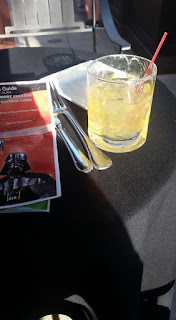 A Sidecar at the Hollywood Brown Derby, enjoying an outside table with no reservation due to being a party of one

I rode the rides. 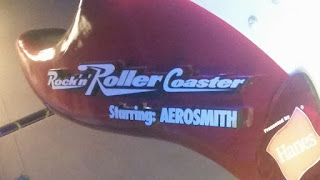 I came home late with Star Wars swag, a headache from a lot of time in 3D glasses or sitting on things that were dropping fast enough to give me the feeling of weightlessness, and a big dumb grin.  I needed that adrenaline fix.  Most of the park was lost on me, but how can you argue with Muppets and light sabers and roller coasters?  I probably enjoyed it more because it was just me and I could do whatever I wanted.  The overwhelmed, sobbing kids were certainly not my problem.

And now I sit out in the sun, wearing a cotton dress and enjoying the 70*, sunny weather. 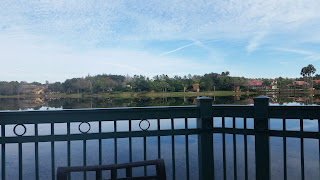 The view from over my laptop screen

Tonight I fly back to New Hampshire.  My winter coat that's been collecting dust for the past five days will be put back into use and I certainly won't be wearing a sun dress again until probably my birthday (late April).  But I'm excited to go back.

There's a certain someone that's also been on vacation that will need to get back into work.  And I have a lot of booze and comfort food to work off.  A guest instructor is coming in next weekend to evaluate our current state of training and I should probably knock off a lot of rust before that happens.  Spring season is right around the corner and Trainer R is putting together an aggressive plan to get us qualified as soon as possible.  By April we'll be out there, strutting our stuff and chasing those qualifying scores.