Not horse related but my car has been featured several times on the blog so it seemed appropriate to provide an update.

I've had this car forever.  I had it before I had Theo, Ben, Fiona, and the blog.  I had it back when Allen was in retirement and I was at my first professional job as an Excel guru at Monster.com.  A 13 year relationship is not one to dismiss lightly.  I'm the opposite of a commitment-phobe.  I bought it brand new back in 2006 and drove it freaking everywhere.  My tiny 2007 Toyota Yaris 3 door liftback was declared the equivalent of a golf cart at the local horse trial and was used to move 5 teenagers, two adults, and two gassy dogs down to stadium to do a course walk.

All good things must come to an end and even my beloved Yaris has a lifespan.  I'd entered a pattern where each year at inspection I needed work.  New exhaust, new suspension, new exhaust manifold, all the things that wear out as you go way outside the usual lifespan of a vehicle.  I also had manual everything.  Windows, locks, transmission.  Want to confuse a teenager in 2019?  Tell them to lower the window in a car without power windows.  It was hilarious.

About two weeks ago I heard a new noise.  The hubby took a look and declared my CV joint boot shredded.  Probably from when I bottomed it out several times on the dirt road during mud season.  That would explain some of the noises, rattles, and drift I'd picked up.  Unfortunately that meant my CV joint had been open to the elements for some time and I live on a dirt road.  I was in for an all new front axel in addition to whatever needed to be done this year.  A coolant flush was on the agenda as routine maintenance.  I was looking at a minimum of $1,000 yet again.  I priced out what it would take to upgrade to power locks, windows, etc.  It was a lot.  My annual inspection was looming.  With great reluctance, I decided to go see what I had for replacement options. 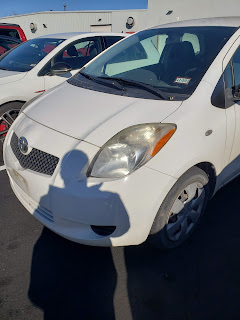 I was actually quite emotional about saying goodbye to AJ, my mighty jelly bean

Shopping for a car has changed a lot since 2006.  I started online, priced everything out, set my test drive appointment, even did a pre-build of what I wanted to do for a payment plan.  I went in the next day to drive the three cars I had in mind.  Once the drives were done, I picked a car and signed my name about fifty times.  I started at 10am, I was out by 1:30pm with my brandy new car that I have dubbed Brandy. 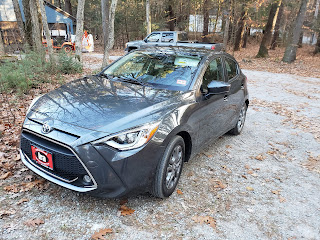 Brandy is a 2020 Toyota Yaris hatchback.  I have a type.  I like my cars tiny, fuel efficient, and just peppy enough to be fun to drive.  I now have electric everything which is just amazing.  Being out of the market for this long means I was easy to impress.  Back up camera!  I have a touch screen on my dashboard!  It's so cool!  My phone runs the touchscreen and I can now get my texts read to me and answer them out loud.  Which will probably go badly at some point in the future but for now, I'm delighted.  Keyless entry is particularly fun but I'm sure I'll lock myself out once or twice getting used to the new routine.

Picking up a car payment does cut into my fun funds but I wasn't planning on 2020 being a big show year anyway.  It'll be a move up year with me struggling through the move up to Third and I expect to do a lot of schooling shows.  I'm looking forward to having a break from the constant repairs and maintenance.  And I can voice command my GPS to give me directions to the barn!
Posted by Catie at 8:44 PM