We've certainly embraced the jumpy jump life.  We've been in consistent jumping lessons for two months after our extended hiatus from any kind of serious business jumping.  We've been taking it slow and low, letting Theo redevelop those muscles and the cardio that jumping courses demands.  I've been rebuilding my position and my eye. 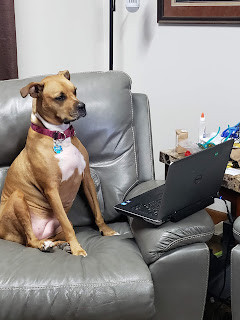 Media is pending so have an adorable picture of my dog

Fortunately my eye appears to have survived it's hibernation.  My first couple lessons were pretty sketchy but I can now spot my distance (or lack there of) from far enough away to actually act on the information.  Or have the moment of 'damn it, gonna eat this one', depending on how close the jump is to my turn.  Theo, for his part, is up for sainthood.  Seriously, he is so freaking amazing to fences.  If I've developed a good canter and do a decent job of getting him pointed at his target, all I have to do is smile and grab mane.  He will handle everything else and now, with Trainer D's help, it's in the right number of strides.  No more pony distances for papi!

Friday was my first jumping clinic since . . . 2015?  Something like that. Grant Wilson dropped by to teach some lessons.  I shared a lesson with my friend and her mare Legs.  I was a bit intimidated since I've just started to get my groove back and my friend is an eventer and field hunter with her mare.  Gallop and jump is kind of their thing and they can jump big.  Oh dear. 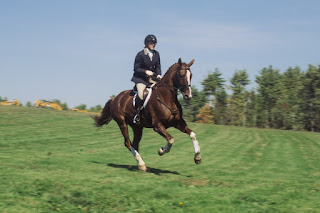 Grant is very laid back when teaching so I didn't stay intimidated for long.  We did a lot of unusual turns and bending lines with lower fences.  Nothing was straight except for the one stride.  He really wanted the horses to change bends back and forth while schooling so they used their bodies more.

Theo started to jump and was apparently quite a surprise.  He's all cold blood and he warms up like a plodding beginner horse, even with our gusty winds and cold temps today (wind chill of 22* for our lesson).  Next to Legs who's 16.3h of gorgeous, elite Hannoverian mare with motor to spare, he looked even more earth bound.  However, we started jumping and papi started to wake up.  Grant was surprised to see that Theo is actually a light, correct jumper that finds it easy.  He started to bring fences up and Theo had zero issue with the fence height.  I don't think we got higher than 2'9" but it felt good to go over some bigger oxers and feel Theo really use his body.  He was as honest as anyone could ask, the only blooper was when he wasn't sure which one I wanted on the bending line.

I bowed out after about 30 minutes of jumping since Theo was starting to blow hard.  It looks like he's due to be clipped again already.  Legs and her rider went on with the fences up at 3' or so, working on the mare waiting for the aids and getting her balanced turning in both directions.  It actually worked out well since she only needed a couple rounds at height and Theo was happy to be done on a positive round.  I bundled him up in his cooler and he hung out with the trainer while Legs jumped the bigger stuff.

We didn't really have much in the way of suggested changes.  Just keep him in front of my leg and that I need to not wimp out and add strides on the bending line.  He can make the distance just fine, go for it.  Theo, being a dressage horse, was quite comfortable with all of the requests to change his bend and his shape.  I might have yelled 'come on dressage pony!' on course.

Our only struggle is opening up again after he collects, but it's getting better.  He answered every exercise easily and on the first try. Only one rail and that was due to him not noticing the cross rail had become a vertical.  He jumped the snot out of it the next time around.  I knew he was getting tired when he started to tap rails behind and we bowed out.

Theo was, yet again, declared a very cool horse.  You can't complain about a horse that will absolutely jump and does so in a safe, sane, eager manner each time.  He was almost too easy to turn and once he learned the course, he almost turned out from under me on the roll back left (his stronger turn).  He was quite displeased by the lead changes through the trot that were being used to rebalance and offered pretty much any other variation you could think of to change his leads.  Poor Third Level pony.

He'll get a day off, then it's dressage time again.  Trainer Z is out on Monday and we've got changes to polish up.
Posted by Catie at 6:25 AM