This will probably cost me my status as a tack ho prospect but I'm very annoyed with bridle shopping right now.  After deciding that the double is going to be staying in my rotation of tools, I started shopping for a double of my own.  This is not a cheap project.  How is it that one more cheekpiece can jack the price up that much?

The traditional cut bridle (the one that's a bunch of straps held together by a browband) doesn't work for Theo's head. The straps jam up against his ears and it makes him unhappy. 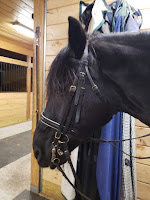 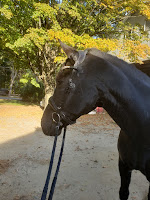 On the left, his current loaner double that is very traditional, on the right is his PS of Sweden snaffle bridle which is more anatomical

It feels awkward to put it on since I'm trying to wiggle it back to get him more space but it requires a different angle to stay there and it just slides right back up to his ears.  The loaner bridle is Amish made and somewhere between Full and X-Full.  He's on the last hole for the noseband and throatlatch but the bits are on the second or third hole.  I did replace the browband with one of my curved ones to give him some more space and make sure the browband isn't pulling the crown up onto his ears.  Pony has a very broad forehead.

He's also between sizes on his curb chain.  Link 2 is a little loose, link 3 is a little tight.  I give up.

I am a well known PS of Sweden fangirl but I did shop around.  The Shockemohle Venice in particular appealed to me but the reviews were not good.  I also know Theo's head is weird and I wanted to be able to get pieces in different sizes.  Flexible Fit was suggested but I wasn't in love with their monocrown crownpiece.  I tried very hard to try another brand but eventually gave up and ordered what I know works for us.

I ordered up a Paragon double bridle from PS of Sweden in the same sizes as Theo's snaffle:  X-Full noseband, Full cheekpieces and crownpiece.  I own a dozen browbands in X-Full so no need to order a new one of those.  I was so excited when it arrived but when I put it on, NOPE.  Too small.  The bradoon was okay if I dropped it all the way down but the weymouth was too high on the last hole.  UGH.  Theo is happy with the weymouth a bit low and the bradoon has smaller rings so that will apparently take a bigger bridle.  The noseband fits on the last hole but I think I also had it too high.  I was too worried about the bits to do more than give it a glance.

My new X-Full crownpiece and X-Full cheekpieces just arrived.  I'm going to be playing mix and match with a lot of pieces to figure out just what Frankenstein combination he needs to be happy.  If the Paragon noseband doesn't work, I can steal the noseband off his snaffle.  Some how, some way, I will have two dressage bridles that fit. 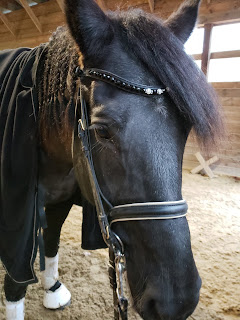 Why is his head so weird?