Warning, you're about to get far more up close and personal with Theo than you ever wanted.  This is the epitome of TMI (too much information for those young enough to not know that one).  You have been warned. 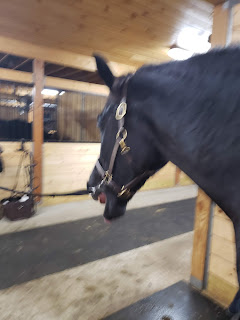 Theo's sheath was itchy.  How did I know?  Not because he rubbed his tail like a normal horse.  Oh no, not Theo.  After being ridden, he reached around and stuffed his head under his own hind leg to bite at his sheath.  Well, okay then.  The first time he did it I didn't really register a problem.  He is totally comfortable scratching most of his body and he's itched his inner thigh under saddle on a couple occasions.  The second time he did it I registered there was a problem but thought it was on the outside of his sheath, like he needed more grooming after getting really sweaty.  The third time, I scheduled a sheath cleaning day.

I grabbed the Excalibur and turned on the warm water in the indoor wash rack.  The nice part about his sheath being itchy was that he was so very cooperative.  I worked the Excalibur up into all the nooks and crannies while he wiggled his lip and cocked his hip to give me more room.  I expected a lot of smegma to get worked loose after I let everything soak.  I could feel rough surfaces up inside his sheath.  I got up in there with the cotton and hm, nothing.  Weird.  Theo's usually a pretty clean gelding but clearly something was bothering him.

After a full cleaning and rinse, he still felt rough inside his sheath.  I was perplexed since sheaths really don't take a lot of work to get clean.  I pulled the side of his sheath back and saw something that frankly boggled my brain. 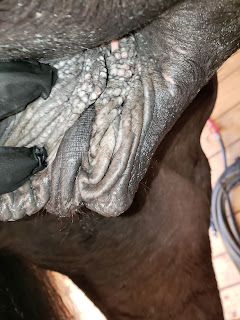 What the hell is that?  And they're all around the inside of his sheath!  It's not like one patch, it's freaking everywhere.  No wonder he's itchy, poor thing.  I can't say I've ever seen anything like that in all my years of sheath cleaning.  And since I usually have his vet do his cleaning, this was my first up close and personal time with his sheath.  I don't even know what's normal for him!  Bad horse mom, bad.

With my anxious tendencies, I started Googling.   I should never Google.  Pretty much everything for lumps on the sheath were cancer, either melanoma, sarcoids, or squamous cell carcinoma.  At least I was able to rule out STIs since Theo's not exactly getting around.  Trainer Z mentioned that there are other options, like infection or even allergic reaction.  I did try a new product on him when I noticed some smega around the opening of his sheath and it was a no-rinse product.  So that might be it?  Having some less terrible options helped, but it didn't make the weekend pass any faster.  I wasn't going to call in the vet on a weekend for something like this (his junk was not in danger of falling off) but it's definitely the sort of thing where you call a vet.

The smegma returned almost immediately and I thought there was a burgundy tint to it.  Blood?!  Maybe?!  The cleaning certainly hadn't helped and his sheath was looking a little more swollen.  AH!  I called the vet for a suspected sheath infection and they zipped out.  We've swapped to the barn vet so it's a new face for Theo.  Not that he minded.  As soon as he realized people were going to touch his itchy sheath, he was a model patient.  He twitched his lip and held his leg out of the way for her.

Diagnosis:  Contact dermatitis that led to an infection.  Antibiotics and antihistamines for a week, then recheck.  Also rinse with just water as needed to keep things clean and pat dry.  The vet gave him a wash with chlorohexadyne which he enjoyed immensely.

So Theo is now on the list of geldings that need only the most gentle of cleansers near his winky.  Even Excalibur may be too much, judging by how the swelling got worse.  Next time he's cleaned, we're going to try chlorohexadyne instead.  This also explains some of the tail twitching I'd started to observe but couldn't spot the cause.  Because it was hidden inside his sheath!  So now I know, manual care is not enough.  Sometimes you've got to get down there and take a look.  Possibly a photo.

I have shown that photo to most of the barn at this point.  Horse ownership is weird.
Posted by Catie at 10:22 AM