So Theo was a bit of an ass on Sunday and decided flexing either longitudinally or laterally was not on his agenda.  I don't know why, possibly because he got Saturday off and subsequently decided that aliens were actively circling the indoor and he needed to look at them.  It could possibly be the long string of rides in his jump tack.  Maybe the massage the day before?  Who knows, but he decided that he wasn't taking any input on his head, neck, or shoulders.  Sure, bro, you go do that.  Only not. 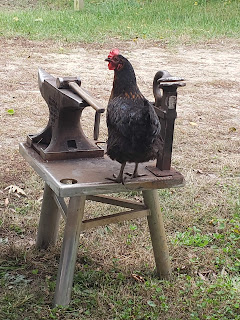 Unrelated cute picture of the resident chicken helping out my farrier

I said stop looking out the door every time we go by and that apparently made him decide that looking out the window was the only thing with any meaning in his life.  This ended with him tearing through the left rein and making my shoulder fail for the first time in two years.  Ouch.  The next day I showed up with my pelham in hand.  No more nice jumpy tack for you if you're going to be a problem child.  He was in a plain loose ring snaffle when we had our argument, not even his NS Verdenbind that usually keeps him from getting ideas.  With my shoulder in pain, I skipped right to the pelham.  We're not reverting to the dark days when the left rein being torn through my hand was a daily occurrence.

He promptly decided to follow up on his previous work and haul on the left rein.  I picked up my curb rein and he promptly changed his mind.  Nope, not mucking around with that, thank you very much.  I let the curb rein go slack, picked up a nice connection on the snaffle rein, and we carried on with our day.  He tested it a couple times, just to be sure, and I picked up the curb as needed to tell him that my left shoulder was off limits.  He sighed and went back to work. 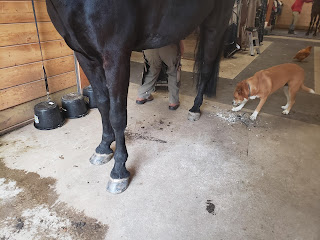 He was so much FUN in that pelham.  I played with some of our lateral stuff because he was staying right where he belongs with zero effort from me.  It kept him from looking out the window every freaking lap and he actually kept his head right around vertical without regular reminders.  I even got him to sit on the right rein correctly because he, for once, had no interest in bickering with my left hand as a way to distract me from the fact he's also laying on my left leg.  It completely broke the cycle of bickering between us.  I set my hands, he set his face, and I kicked his booty right up between my hands.  I could really get him in front of my leg because he wasn't trying to go above the bit to get out of using his back.  It was like someone had turned on the power steering.  I felt like I could whisper and he would answer.

Now it's not a magical perfect thing.  He's not good in a fat, fixed cheek snaffle and that's what I end up with when I drop the curb.  I can't get off his face enough for him to be truly comfortable.  And when I jumped in it the following day, he started out fantastic but got pissy when he got tired because it was too much bit all the time.  It's never a real snaffle, even when I tied my curb rein off so it wasn't even in my hand.  But man, it was nice to have a ride with zero bickering about what frame I wanted and whether or not his shoulders were available for me to manipulate.  If only I could do that with a loose ring snaffle to drop back on. 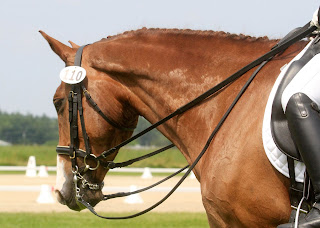 I might have ordered up a short shank weymouth so I can build Theo a double bridle.  Not as a show rig or every day rig or anything like that, but to replace my pelham as my 'knock it off' rig.  We're schooling Third so we're actually at the appropriate level to introduce a double.  He isn't at all strong enough to show in a double, but I think an occasional tune up ride would do us both good.  Trainer Z gave me a thumbs up on the idea of introducing this tool to the tool box and my friend is lending me Dorkzilla's old double to try.  I'm hoping some of Dorkzilla's crazy talent has oozed into the leather and will rub off on Theo.

I'm equal parts terrified and curious about this next step in our education.  I've got the hands for it, but the double is such a big kids dressage thing.  Even if it's a spectacular failure and he hates it, I'll get pictures of Theo wearing it.  He'll look so fancy.
Posted by Catie at 9:47 AM