I bounce, you bounce, we bounce

Our mission to improve Theo's canter continues.  Weeks of focus are starting to pay off.  Trainer D has been laser focused on getting a bigger canter out of him.  She insists on that 12 foot stride every time and Theo is starting to wrap his head around that being his new reality.  We did grid work this week and he was confidently going through the exercise even when it was set a bit long.  When I ask for a canter, he's much more willing to go forward into the transition rather than doing a couple of strides mostly in place.

In my lessons with Trainer D, it's time to ignore what his head and neck are doing and instead focus on a willing, rhythmical, forward canter.  I'm off his back and worried about keeping him straight between my hands and legs.  Half the time I've got my hands halfway up his neck or buried in his mane, working on my still unsteady jumping position.  I'm strong, but I've picked up a lot of bad habits that I now need to break.  With Trainer D's insistence on a real canter, we've moved to a canter that averages 18.5cm in elevation.  We've got multiple rides at that elevation now so it wasn't a fluke.

When I ride in my dressage tack and sit down, that big, bouncy canter collapses.  I go from our new 18.5cm elevation to a 14cm elevation.  Hm, that sounds suspiciously like it's the rider's fault. 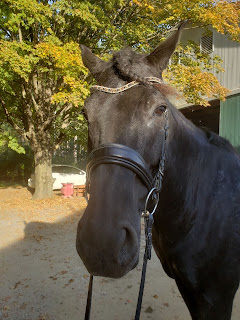 Rider's fault?  Theo is shocked, this is his shocked face.

Today I rode in my dressage gear with the goal of keeping that big, forward canter with my butt in the saddle.  I warmed up by getting up off his back and developing the same canter I use to jump.  Put his head wherever, stay off his back, just develop the big bounce.  Once I had to canter established, I started to sit and establish a contact.  I sat softly to start and gradually added weight as I adapted to his bigger canter.  It takes a heck of a lot of hip movement to keep that big canter with my butt in the saddle.  I really had to focus on not squishing his canter but instead focusing on the up part of the stride.  Kind of scoop like ice cream and suction cup his back up with my butt and thighs, to use a visual from Mary Wanless.  Which frankly sounds very weird when you just type it out like that.  I botched it and had to get up off his back several times but at least I could get a feel for what I was working to maintain.  And get used to the idea that Theo actually can canter with that kind of movement.

Once I got it, I was able to maintain a canter at around 18cm elevation with my tush in the saddle.  There's a lot of work to do there, but it certainly felt a lot better.  I could get Theo on the contact while maintaining the bounce and the three beat canter.  Progress! 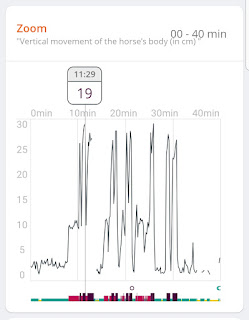 Elevation drifted down as he got more tired but he was pretty consistently up in the 18cm range in the canter, half pass work was the last thing we worked on and got us a big dip in elevation

His average elevation dropped to 14cm when I asked for the canter half pass.  That could be strength or I am sitting too heavy and squishing him because I'm overriding.  Like I do.  We'll see what Trainer Z says.

His flying changes are also benefiting from this new routine.  Our right to left change has become steady enough that he's starting to offer it on his own.  I'll hate that later but for right now, a drama free change is a win.  The left to right is sticky and he takes a pretty good bump with the spur to convince him to change.  The massage therapist was out today and working through his sore spots.  He had a very strong opinion about his left hind so not much of a surprise he didn't want to really bounce off that side.

Tomorrow is our ride with Trainer Z.  I'm hoping she'll be happy with our progress in the canter.  We've developed some trouble with him anticipating in the trot and breaking to canter but what can you do.  There's always something you need to work on.
Posted by Catie at 1:40 PM