And with a dull thud, the show season is over.  The leaves are falling, there's a chill in the air, and all the pressure I've felt since April is suddenly gone. 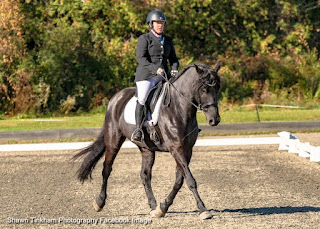 My trailer is parked with no intention of moving it for over a month.  All of my white breeches have gone into storage until next spring.  Theo's hairy, dirty, and loving it.  The grazing pastures are already being shut down since the grass has quit growing and the ponies were already starting to chew at nubs.  We're down to 11 hours of sunlight a day with sunset at 6pm.  There's only a couple weeks left before the clocks change and we're riding in the dark every evening.  Gotta love sunset at 4pm. 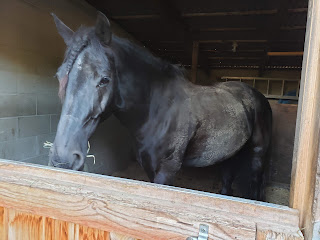 This time of year is my favorite for riding but at the same time I feel adrift.  I'm so relieved that the season is over.  For us, it was an aggressive season with a lot of outings.  My weekends are now open and I don't have crazy wake up calls so I can drive hours and then try to not puke in front of a judge.  I'm throwing out the tattered, creased, and stained copies of my tests that were all over my truck, car, purse, desk, you name it.  But what do you do for motivation when you have no goal in front of your nose for the first time in six months? 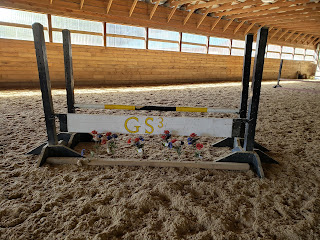 Regular jumping lessons are keeping me from just giving the pony a kiss on the nose and skipping the riding.  We do the big canter, jump the (little) jumps, and try to do the flying changes.  Theo's having his temper tantrum phase of training in regards to flying changes where he realizes the rules have changed and he throws a complete fit about it.  First I want counter canter, then I want simple changes, and now I want flying changes?  Clearly I don't know what I'm doing and he's going to make his displeasure at my incompetence known.  Prop and buck are a go.  Ugh.

It's a delicate balance between keeping up with my riding and not pushing myself to keep progressing.  I'm trying to embrace being a slacker since slacking off for a month is a good way to combat burnout.  And believe me, at that last show, I was feeling burnt out.  The idea of starting my Third level moves didn't sound appealing after busting my butt since February to survive my move up to Second.  I'm still feeling a bit burnt out.  I know I'll be taking a serious break in the winter when it's stupid cold and icy out so I'm not too concerned, but I don't want to get miserable and get into that bad head space.

Might be a good time to practice hacking outside.  We made it all the way around the barn and down around the paddocks last time without a melt down, it's progress.
Posted by Catie at 5:37 PM