Who knew two bits could be so complicated?

I've never built a double.  I know how to build bridles so surely this couldn't be too bad.  Right?  It took some hunting but I found a bit that looked like his western dressage curb bit at a reasonable price.  $90 for a short shank weymouth and it comes with a bradoon?  Sign me up!  Pictured with my pelham for comparison. 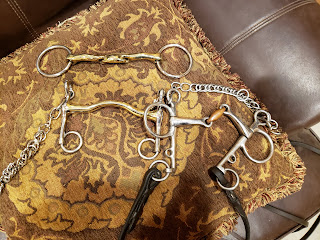 I got the bits at Classic Saddlery if anyone else is looking for a set like this.  They also have a set with a longer shank.  Super quick shipping and great communication.  The bits feel light but nice.  They're not $300 bits, but they're nice and I am happy with my purchase.  They'll serve my purpose and are a great starting point for us.  No point in dropping a ton of money on bits when I don't know how he's going to react.

I also ordered a gel curb chain guard from Rider's Warehouse.  I want everything to be as gentle as possible and he uses a leather curb with his western dressage bridle.  Getting that cover on was a bit of a nightmare but with some wiggling and stretching I made it work.

And then I tried assembling.  Um, right.  How does someone put two bits on the same bridle?  I mean I get that the bradoon goes on one set of cheek pieces and the weymouth on the other and the weymouth goes in front of the snaffle but one is double jointed and one has no joints so it's really not that easy and all those straps and reins make for a hopeless muddle. 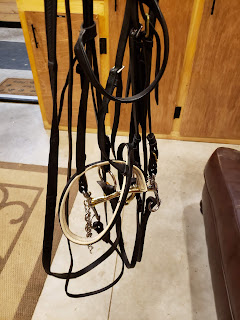 This goes on his head how?

Thank goodness for more experienced friends that will wade in and get you straightened out.   After a lot of fiddling and mussing while my horse was a saint, we got the bridle on his head in mostly the right way.  It's definitely a fussy business getting two bits settled.  The bradoon went up and down several times before we settled here.  The weymouth will probably move up one hole but the bits were starting to interfere so it stayed here for today.  Complicated! 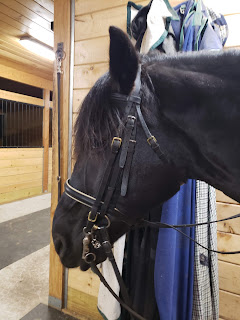 Theo played with his two bits for a minute before deciding it wasn't even worth messing with.  His noseband is completely slack as usual, especially when he's getting used to having a bit more going on in his mouth than usual.

As for riding him with it?  It was so anti-climactic.  He barely noticed.  He trotted around like a western pleasure pony while I let him get used to the idea.  I left his curb rein loose even when I picked up a little contact.  It proved to be the perfect bit choice when he thought he ought to act up during his canter work.  He started to throw his head and dive left, I touched the curb, and he abandoned the idea.  The next time around he stayed on a nice soft contact without the dramatics.  #winning  #fallponybrain  #seriouslywtftheo

We worked for a total of fifteen minutes, ten of which was on the buckle while he adapted to his new rig.  I say adapted, it was mostly me worrying while he acted like he's worn this bridle all his life.  My friend was sure this wasn't his first ride in the double and when I assured her it was, she was impressed with how utterly chill he was.  No chomping, no fussing.  The only change we need to make is to swap to sugar cubes since he has a harder time working his cookies into place with the extra bit.  Not that it stopped him any but it's distracting for him when he's trying to get bits of treat worked free of his bits.

We'll keep playing with the fit and Trainer Z will be out on Sunday to weigh in on how everything looks.  But it's another milestone for us, he's got a double!
Posted by Catie at 6:55 PM