Spring in his step

Let's talk about how amazing my horse is. 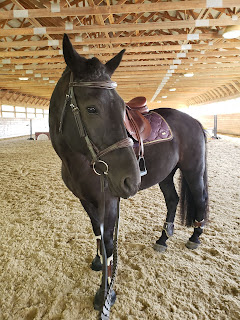 Our jumper lesson outfit, I loathe the way this browband fits him, I can't get it to lay nicely with his very broad forehead

Boring topic, yeah, but sometimes he just blows my mind.  Last weekend he went out and marched around at Second, looked totally like a dressage pony.  Collection, laterals, the whole thing.  Today I had my second jumping lesson.  I told Trainer D that I am struggling with ditching some of my eventer habits like opening up my position on landing.  I'm also supposed to be working on forward per both of my trainers (4.5 for a medium is NOT cool).  Trainer D nodded and said she saw that in my jumping since both Theo and I will shorten when going down to a fence.  That's kind of the opposite of what I'm supposed to be doing.  When coming out of the corner, you maintain or go forward, it's very rare you actually need to shorten.  Especially on Theo.

We warmed up and Theo was very distracted by all of the activity outside of the arena.  The family that owns the corn field behind the arena was out with their kids and Theo thought I'd brought him to visit the Children of the Corn.  Trainer D got to see his spin for the first time when I didn't guard the left appropriately and she was quite impressed.  It really is one hell of a spin.  Not much I can do about it but keep him working and make damn sure I manage that left shoulder.  At least he quit dropping that shoulder.  Now he tries to bring me with him.  Progress?

Aside from that, we focused on rhythm while changing the size of his stride.  Everyone knows the spiral in, leg yield out exercise.  Yawn.  But this was a variation I didn't know.  Start with a big, open, jumping canter.  Start bringing your circle in smaller and smaller.  Don't let your rhythm change, don't lose the impulsion.  The stride will naturally shorten to make it possible (especially with fancy pants that took it down to just under a 10m circle).  But when you open it up, open the stride back up.  Why did I never think of this?  I can tell this exercise is usually for horses that don't shorten well but it works just as well for horses that shorten easily but don't open back up.  We did this a couple times both ways, working on Theo shortening and lengthening while not changing his rhythm.

For our jumps, we started cantering over a cross rail with a rail a stride out.  I wasn't allowed out of my two point until after the rail.  And I had to move my hands up to a crest release.  I was hanging on to Theo's mane with both hands while fighting my reflexes.  I actually dropped a rein at one point because I was so focused on grabbing mane.  Trainer D was very happy with my softer position and me not snapping open but it's such a struggle right now that I can't do much else.  If Theo needs me to actually, you know, ride?  The two point falls back apart.  Good thing he doesn't need me much right now. 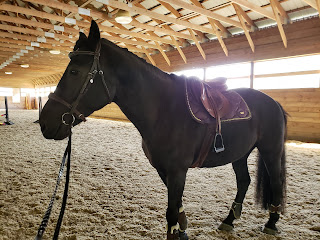 We moved on to a little course with the barrels and an oxer with a plank.  He's such an honest boy.  Squished in the extra stride to the new, looky fences but jumped nicely.  We worked on pace.  More pace.  Move up to the fences, don't touch his face.  He compresses off nothing, you don't need your hands.  I knew when we had it because I could get up off his back and see that perfect spot four strides out.  The light bulb started to flicker and Theo started to push toward the fences rather than shorten.  Our last oxer got us a 'yes!' from Trainer D as we pushed forward out of the corner, nailed the distance, and had tons of impulsion for the jump.  I grabbed mane with both hands well up his neck and didn't let go until well after landing.  It's a good thing he's got all that hair.

I'd forgotten how addictive it is to have a horse carry you down to a fence with enthusiasm and then jump the dickens out of it from the perfect distance.  He's no hunter but he does have a stylish way of getting over the sticks.

He's so much damn fun to jump.  I can barely remember the days when he was tricky and refused everything.  His ears come up and he locks on like a heat seeking missle.  He may spook or spin at things between fences but when we're on approach, he's all business.  We're not jumping big right now, probably 2'3" - 2'6" but he's having a blast.  It's serving the purpose of lighting him up in a positive way.  I had to ditch my crop for our last couple rounds because he was getting a bit hot and reactive.  Which is a good thing.  Sort of.

The jumping addiction is back in full force.  Good thing Trainer Z is coming out to visit on the 22nd.
Posted by Catie at 12:59 PM