I had my first lesson with the resident h/j trainer who I will dub Trainer D.  I wasn't too nervous going into this because, let's face it, the bar was not set high.  I'm a middle aged ammy on her middle aged draft cross.  Everyone knows we do dressage.  I was quite clear that I haven't had a jump lesson in about a year and equitation?  That last happened over a decade ago.  I've been doing the eventers and survival trumps all in that discipline.  We confidently and safely jump 2'6" but that doesn't mean it's very pretty or polished. 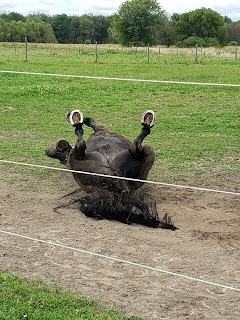 We're not really known for being pretty and polished

For the curious, I wore my brown knee patch Pipers with the purple piping, a dark purple polo, and purple belt with rhinestones on the buckle.  Brown croc open front boots, purple PS of Sweden saddle pad, and black bell boots for Theo.  I went with the loose ring snaffle because I tried him in his old french link D ring and he hated it.  Like head around his ankles and actively avoiding the bit.  WTF, Theo.  Trainer D was also mystified when I told her so we'll play with bits to see what mouthpiece he wants in a fixed cheek bit.  For now, skinny loose ring snaffle it is.

We warmed up like usual, trotting and cantering on the buckle.  She was quite pleased to see him so comfortable working on the buckle and complimented his steady canter rhythm.  Not as much knee action as she was expecting with his breeding but definitely not type-y enough for the hunter ring.  Sorry, Theo, it's just not in the cards.  2'6" eq horse, though?  Trainer D is solidly on board, especially after we started cantering around a course.  Theo is so good at coming down to a fence with a nice, steady rhythm.  Even over the barrels he hadn't jumped yet, he neatly tucked in an extra stride and over jumped rather than doing anything dramatic or changing his rhythm.  Trainer D declared him very cool and a great partner for equitation.  My homework for him?  NOTHING.  Not a damn thing.  Just let him get used to cantering in a more free, less managed way since he was a bit puzzled by the sudden lack of seat and contact.  He is perfect as is and got no homework.  Show off fancy pants pony, geeze. 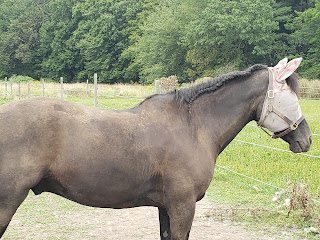 No lesson media so have a picture of what he did right after our lesson when I turned him back out, filthy pony

As for me?  Well, I laughed a lot because I knew this was coming.  She said two point and I got right up out of my saddle.  No, no, more angle.  Get your butt out behind you.  Hands up his neck.  More.  I can hear all of my eventer trainers of the past screaming.  Muscle memory did eventually kick in and I trotted around the ring with my fanny back and my chest closer to his withers and my hands further up his neck.  My butt is solidly over the saddle because I've ridden so many dirty horses that I don't get in front of the motion (I like living), but it definitely felt weird to practice a crest release after so many years.  My heels aren't used to me really focusing on them and the ankle stabilizers have atrophied, so that was uncomfortable.

Who am I kidding, everything has atrophied!  Thighs, hammies, ankles, even parts of my abs and butt were protesting.  I was cantering around the course with my horse being damn near perfect and I'm struggling to stay down in my eq position and not open up into my eventer position or sit deep to micromanage like a DQ and my thighs burning all the way around.  I'm going to be spending a lot of time trotting and cantering around in two point while I rebuild those muscles.  I was hurting when I got home and had to rush upstairs to my office for a meeting. 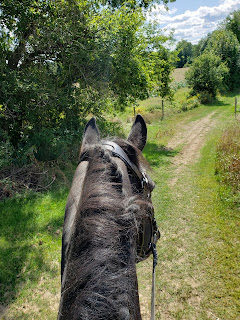 But the lesson went super.  Trainer D was very calm, positive, and clear.  She hit things like shoulders popping out, not being straight enough in the canter, and other details that I really need to focus on.  I know it, but it helps to have someone else keep me on top of things.  She didn't call for anything dramatic in terms of my position or Theo's way of going.  Yes, crest release and no opening up on landing, but I'm also not allowed to fall on the neck.  She agrees that we'll probably spend all winter putting polish on me while Theo basically keeps being amazing and builds up some jumping muscles and confidence for jumping without me micromanaging him.  He's grown up so much that he doesn't really need me at the jump.  If I canter down in a good balance with plenty of pace, he knows what to do.  I just need to look pretty.  Which is what an eq horse does.

Might have to shop for some new field boots while I'm getting those dressage boots this winter.
Posted by Catie at 2:02 PM