A friend got a lovely KWPN mare a couple years back.  When the KWPN keuring tour came out to Massachusetts this year, she decided she wanted to have her mare inspected.  I tagged along since I'd never been to any kind of inspection and I wanted to learn more.  So here's what I saw when I wandered into a keuring.

First up were two mares doing their IBOP tests.  I have no idea what that stands for, but it was an undersaddle test for dressage horses.  First they both did a dressage test in a small arena, then they came back in for the judges to watch them being ridden while they gave instructions (walk, trot, more forward, softer hands, shoulder in, lengthen, etc).  The judges were looking for their dressage potential and after seeing the process, I'd probably want my horse at least schooling Second before I went in.  They're judging things like being uphill, the connection, and marked down on submission for resistance to the shoulder in for one mare.  It makes sense after watching the five year old test.  They weren't looking for a completely baked Second level horse, but I'd want to at least feel like I could do the trot work and the medium canter.  Lots of interest in how the mares handled lenghtening in the gaits.

The first mare was five years old, the second was eight.  The two were very different so it was nice to see the difference in marks and comments from the judges.  The younger mare is a half sister to my friend's mare (same sire) and I could see the family resemblance.  They're both very light on their feet and carry themselves beautifully all on their own.  The older mare didn't have the same carrying power or hind end action, so it didn't have the same effortless look.  The younger mare took to collection as easily as breathing.  The younger mare got a 79.5 while the older mare got a 69. 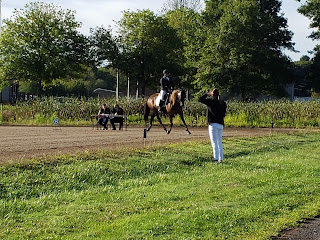 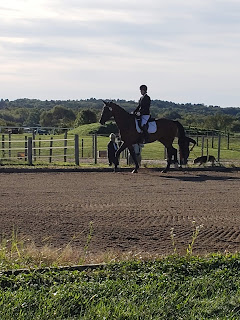 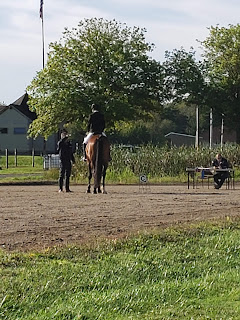 I couldn't figure out the difference I was seeing until the judges made their comments.  That was the best part.  After the mares were done, the judges would tell us what they liked, what needed improvement, and what scores they gave out.  After the two under saddle tests, we headed to the indoor for the free movement and in hand classes.  My friend's mare was in the Studbook Inspection, 4 to 7 year old mares class.

First up they needed to measure all of the horses, then watch them trot on a hard surface.  I have no pictures of the actual measuring because trying to measure a bunch of wound up youngsters was . . . exciting.  Thank the heavens for professional handlers that know how to get that done.  Once heights were recorded, the horses walked and trotted off on a hard surface. 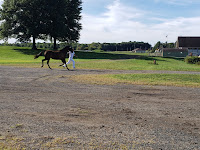 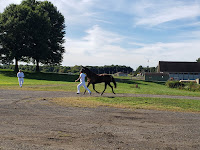 My friend's mare taking her handler for a run, let's just say these are the photos when she was being civil

This professional handler handled most of the horses and boy oh boy did he earn his paycheck.  So many bouncy babies.  My friend's mare is very strong, athletic, and confident.  She'd also spent the night in a stall and hadn't had a chance to go in turn out so she was quite a kite.

This mare stole my heart when she, at five, trotted off like a complete lady and then went back to snoozing while the other mares snorted and carried on. 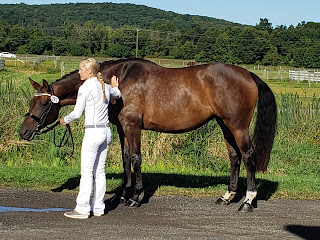 My new heart horse was also the first horse into the indoor.  The indoor was set up for free movement where they let the horses loose to trot and canter.  There are two marked off spots in the center to form a figure eight and give the judges a safe spot to watch.  The spectators were loaded into a chute along the side of the ring for our own safety.  Once the horse was in the arena, the big door for the indoor was closed with much snorting from the horses.  All mirrors were covered. 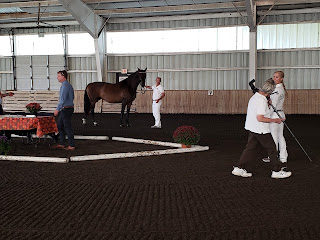 Horses would walk in hand around the ring, then the reins were removed from the bridle and they were set loose to trot and canter with a change of direction.  Three handlers in the middle with lunge whips kept them moving along and managed changes of direction.  They also helped capture the horses once the judges were done.  The free movement ranged wildly throughout the day from civilized to bronco show. 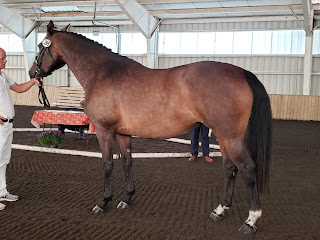 My heart horse did get into the studbook but did not get her Ster predicate.  She was weak in the loins and they wanted more reach and power from behind.  I can see that, but I want her anyway.  She looks like plenty of pony for this ammy and her mind was very settled.

Next was the mare we dubbed the dragon because of her snorting, tail flagging, and occasional honks while waiting her turn.  In the free movement, it was more of the same.

Four year old mare by Navarone out of a Goodtimes mare

She also got into the studbook, but did not get a Ster predicate.  One of the judges, after looking at her pedigree, suggested she be reentered as a Gelder due to her breeding.  They're looking for different things with a Gelder instead of a dressage focused horse.  With this change in the test, she not only got her Ster predicate but her Keur predicate as well.  I'll admit that this whole bit confused the daylights out of me but the breeder seemed very happy.

Next up was my friend's mare.
Release the beast!  Iz was so excited to get out and play for a bit 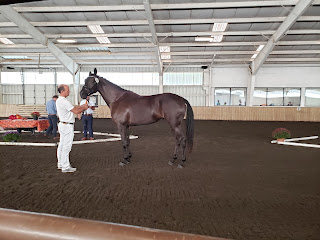 Six year old mare by UB 40 out of a Metall mare (Rabiola, yes, that Rabiola)

She was so sassy, even the judges had to help corner her to catch her after her free movement because she was having so much fun.  Someone commented on her confidence because she was not at all nervous, just having a blast playing 'catch me if you can'.  She got a 75 conformation, a 75 movement, and her Ster predicate.  Woohoo!  She did not get her Keur predicate because she was too on her forehand, but it was close.  My friend is planning to come back next year to do the IBOP so her mare shows off her best moves and doesn't tear around on her forehand encouraging people to chase her.

The last mare was the younger mare from the IBOP test.  She was shown in hand since they already had movement scores from her IBOP. 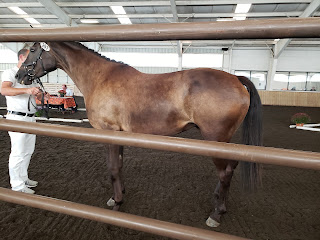 Loved her, too, my size and handled a chaotic dressage ring with a reasonable amount of drama for a five year old

While her conformation score wasn't the highest (she's kind of short), her movement and under saddle were so good that not only did she get her Ster predicate, she got her Keur.  Good day for the UB 40 daughters!

Once the mares called it a day, there was one colt for an advisory class.  This is where they bring in a youngster that they're considering a stallion prospect and want to see what the judges think. 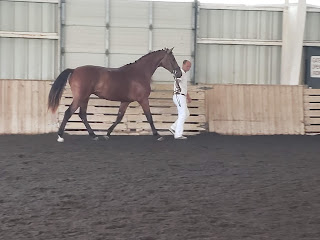 Two year old colt by Hennessy out of a Flemmingh mare

He didn't score that well, a 69 or so, so I don't know if he'll be keeping his testicles.  The judges were not happy with his weak pasterns and really pointed them out.

Next were the foals!  Let's face it, the real reason I went to watch my friend was for the foals.  The procedure is to bring them in with mom in a bridle and the foal in a halter.  They try to get them to stand long enough for the judges to get a look.  Then they trot mom around once in hand with the foal loose to see the foal trot (somewhere in the bouncing) and then, as one breeder put it, everyone is let loose for zoomie time.  The reins come off the mare's bridle and they're set loose to see the foal canter.  There were five dressage foals and four jumper foals.  Dressage foals went first (I didn't get reasonable photos of two of them, dang wiggly babies) 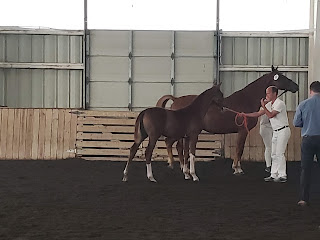 Colt by Gaudi out of a Bon Bravour mare 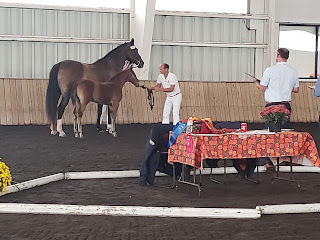 Filly by Navarone out of a Goodtimes mare 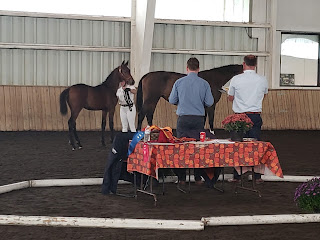 Colt by Hennessy out of a Silvano N mare

The stunner was the Gaudi colt, he just blew us away.  There was a lot of 'wow' from the spectators when he started moving.  He got an 81 and well deserved.  Since he was first in the ring and I wanted to get a video of the whole foal process, I got video of his whole round.  Enjoy!


And then came the jumper foals. 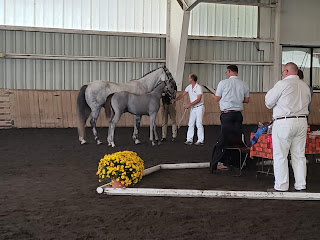 Filly by Up to Date MLTOO out of a Cassino mare 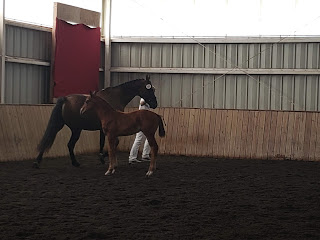 Colt by Up To Date MLTOO out of a Veron mare 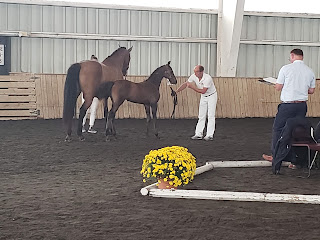 Filly by Zapatero VDL out of a Veron mare 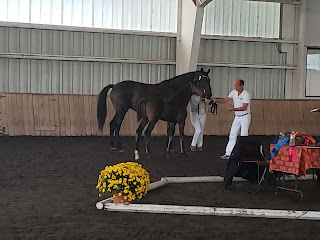 Colt by Impressive VDL out of a Crespo VDL mare

I wanted the grey foal that already leads nicely, let her halter be put on without fussing, and walked calmly through other horses acting up and rearing.  She was last in her class, but still got Second Premium and I would have thrown her in the back of my car in an instant.  She was just my type. 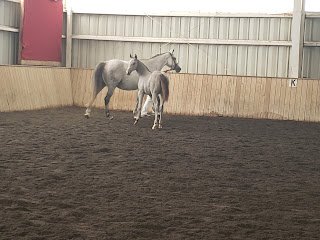 The winner was the very fancy bay filly by Zapatero.  She was beautiful but I can already tell she's going to be too much horse for an ammy like me.  Second went to the colt by Impressive (but the breeder was watching him rearing and I swear she was whispering 'gelding' to herself).

And with that, the day was over!  The amazing dressage foal also took high point for the keuring.  We discussed stealing foals and stuffing them in my friend's trailer but I started getting weird looks from breeders so I hushed and went home without a foal.

I feel like I learned a lot.  A couple stallions had multiple babies at the same outing so I could do some comparison.  The UB 40 daughters certainly had a resemblance.  They both had the same very confident, sensitive, almost reactive personality.  Too much horse for me but for my friend that wanted a CDI horse?  Perfect. 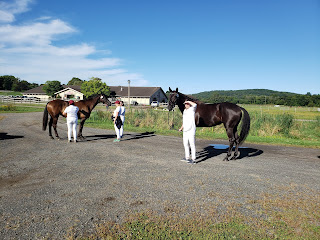 The UB 40 daughters waiting their turn

The Sir Sinclair foal had a dam I found unappealing, so the fact I really liked the foal was interesting.  The judges even pointed out how much nicer the foal was than the mare as a compliment to the breeding, so I'll look at him again.  I also fell in love with a broodmare named Rubi that was just such a pro at the keuring.  She was a show horse in her own right with beautiful movement (even with the broodmare belly) and her calm, professional behavior as she took her foal around.  The breeder talked to me a bit and Rubi was a favorite of his.  If that's the temperament they breed for, I want to know more.  They also had a jumper foal that was very sensible.

I'm a long way off from getting another horse, but this is the first step in getting me more educated.  One day I may actually own a horse with a pedigree.  One day.