Forget pumpkin spice lattes, aisles full of Halloween decorations, or the ads for Pick Your Own Pumpkins (that one might be a New England thing).  I know it's fall when two things happen.

First, Theo gets his first body clip of the season. 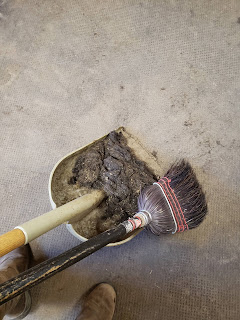 Second, he decides to dance the dance of his people, usually with some vocal accompaniment that sound suspiciously like dolphin squeals. 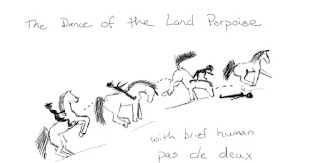 I'd planned on riding outside.  I had a friend and her steady horse all lined up.  I thought I would warm up in the indoor, then head outside for a nice hack and maybe a bit of trotting.  NOPE.  I did not calculate for the drop in temps that occurred the night before and Theo getting a night off.  My friend came to the indoor just in time to see Theo go from tight, slightly pissy canter to full on land porpoise bronc.  I stopped him and Trainer D (who was trying to teach, oops) says 'are you okay?'.  My smart ass adrenaline fueled response?  He does that sometimes.

I worked that damn horse for an hour with very little in the way of breaks to find the bottom of that mess.  He had one more outburst right in front of Trainer D but kept his feet on the floor for most of it.  By the end he was content to stand and watch the other three horses canter together so I took that as a win and got off to cool him off outside. 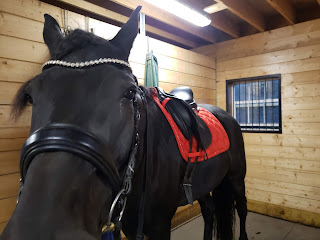 Does not feel at all bad about his life choices

Hopefully that and some slightly warmer temps will set us up for success in our lesson today.  And this weekend will be in the eighties so he should be a total slug for the Trainer Z lesson on Sunday.  But at least we won't be dealing with those dolphin sounds he makes while bouncing up and down because he just can't deal with himself anymore.
Posted by Catie at 7:15 AM