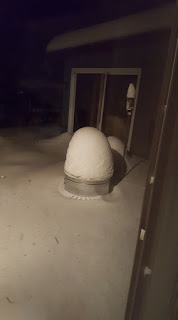 My deck when the snow stopped last night

We had a beast of a storm go through last night.  We got about a foot of snow, the coast saw some really tough coastal flooding, winds were steady at 30mph, gusted to 50mph, and overall it sucked.  The new arctic air is coming in.  Like we needed to re-up or something.  Tomorrow our high is 0* and low is -11*.

Getting the dogs to go out has become a real ordeal.  They stand in the doorway, look out at the tundra in horror, and I have to push them out.  Once outside, Aura bounds around like a deer on crack, dragging me off my feet, causing me to fall into snow banks, and generally flailing for the 60 seconds her hairless, fatless body can handle the cold.  Then she needs to go in and we may have to carry her if her feet have frozen.  We now have an indoor and an outdoor coat for her.  We tried putting boots on her but her little cat shaped feet pop out as soon as she gives them a shake.  Being a boxer is tough. 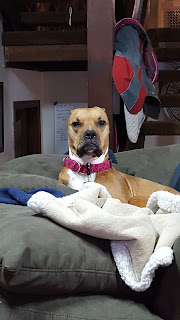 Peyton can't see over the snow and has to stick to the plowed trails.   She refuses to wear clothes and with her double coat, she doesn't need them.  But she's so tiny that the ground just sucks heat out of her and she doesn't last much longer than her sister.  She's also very disdainful about getting wet and would like to know why we haven't gotten her yard completely cleared yet and why we're letting this wind keep blowing. 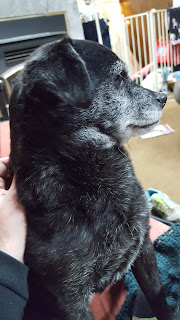 The chug in her very fluffy winter coat

I've actually gotten concerned messages from people that have been watching the news.  I'm far enough away from the coast that it's just cold, wind, and a whole bunch of snow here.  We did not lose power by some miracle and our back up generator is on standby, just in case.  We're toasty warm and safe.  The barn has checked in and, aside from cancelling all lessons for the next two days, things are chugging along like normal.  The ponies are bundled up and several were seen playing in the snow.  They must know how miserable tomorrow is going to be.

The winds were pretty fierce last night.  There were a couple points where I wanted to crouch down and hide because I could swear the house was shaking.  I could hear the trees groaning.  Fortunately we've had so many wind storms at this point that we had no big branches down immediately around the house.  The trees are looking tattered, but they're still upright.  Everyone is taking today to dig out and check on neighbors as the temps drop.

This weather is pretty insane.  My whining aside, this was not a gentle storm and anyone that lost power is in serious trouble.  The last three weeks have been completely abnormal.  This is NOT NORMAL. 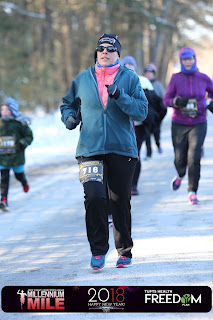 My race photo, showing all of the layers needed to run at 0*

But I can see the light at the end of the tunnel.  Monday?  31* and my return to the barn.  Just in time for my break from work, the temps will normalize.  Theo will be getting his Irish clip and we'll be legging him back up after his two week vacation.  My new saddle has been sitting for two weeks with the stirrups turned, so it should be ready to go.  I got my new draft sized western headstall (regular headstall did not fit, sob) and reins so he'll finally have matching western gear.  It was bugging me to have a dressage bridle with the brown western saddle.

I'm almost there.  I have two more days of brutal cold to weather, then I can get back to work.  Come on, normalcy!  I could use a bit of that bamly coastal New England winter!
Posted by Catie at 9:23 AM