Started out the year by running a mile even though nothing was chasing me, then turning around and jogging back because it was freaking cold and I wanted to go inside. 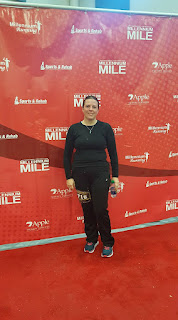 Hate this picture, but it's proof of my insanity
I also wanted my beer. 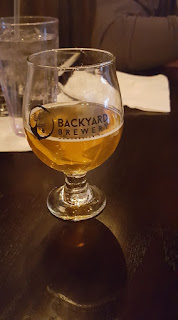 I did a mile in 10:24 which counts as a personal record.  Because I've only done two races in my life and in my first one, I did three miles in 38 minutes.  So I'm two minutes faster per mile.  Not that I could keep that pace up for three miles, I sprinted the last quarter mile since I could see the finish line and had no need to keep a reserve.  I mean, a sprint in my world is actually running instead of shuffling, but at least I've made it to the point where I can run!

Then we immediately had to turn around and walk back to the starting area.  With 966 runners going all of one mile, shuttle buses wouldn't work.  It would take forever to get us all loaded.  It was faster to just walk back.  Or in my case, walk/jog/whatever it took to get out of that weather.  About 0* out per the news report on the race and winds around 15mph.  Windchill was sub zero.  The race was downhill and specifically set up to be as easy as possible so people could start the year with new personal records (two people finished in under four minutes).  The walk back?  Uphill, into the wind, torture.  We went past a farm which meant a big, open field with nothing to stop the wind.  It was also the steepest part of the uphill.

Children started crying, there were little shrieks when the wind suddenly blasted us with blowing snow, and exhausted runners started forcing their done legs to run again as we all tried to return to the shelter of the high school gym.  It was an odd camaraderie with the thousand people that thought going for a run in record setting cold on January 1 was a good idea.  A herd mentality kicked in and no one wanted to be last.  We closed ranks and shuffled through the wind and cold together. 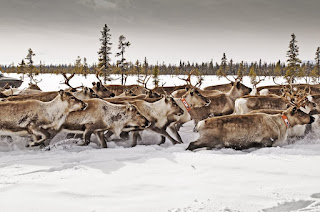 Reenactment of our march

Then there was pizza, yogurt, music, and a warm gym complete with cheerleaders to greet us like conquering heroes. 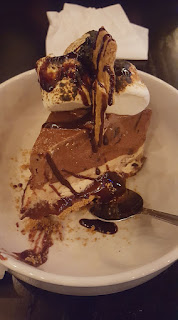 We all got tickets for a free beer at the brewery down the road and I took the hubby with me to get lunch and enjoy my reward.  I figured I'd burned enough calories to earn a decadent dessert.  Of course I only ate about four bites with my blood sugar issues, but they were great.

I woke up this morning and saw that it was -10* out.  That's before the windchill.  I haven't been able to ride in a week due to this crazy weather and the high for Saturday is forecasted to be -2*.  They're still predicting a return to normal for my vacation so it may work out.  Theo gets a vacation rather than a day here or there and then we pick up again on the 9th.  While he chills and gets fat, I'll keep shuffling along.  Next race is on the 16th, a 5k.  Hopefully it won't be quite so mind numbingly, painfully, record setting-ly cold.