The one bit of negative feedback I've received in regards to Theo's future as a western dressage horse is that he doesn't look as light in the bridle as the judges will like.  No, they don't want a loop in the rein like a western pleasure pony, but it should still look effortless, like it's the horse's idea.  I usually say that a horse can be ridden with fishing line when they're really light in the hand.  I think they want Theo to be a fishing line type of a horse.

It was suggested that I try him in a western curb, to get that look.  I don't mind a curb, my pelham has served me well when jumping outside and when my shoulder just couldn't handle what mi papi was dishing out.  However, my gut reaction was that it was the wrong move.  I said that I was concerned he would disappear behind the bit again.  I just fixed this dang connection.

Ugh.  Time to stick to my guns.  No, no, no.  He does not need a curb.  A curb is going to send him diving down on his shoulders.  Does he need to be lighter in my hand?  Yes, but that's like saying he needs to be lighter on his forehand.  Every dressage horse wants to be lighter in front and lighter in the bridle while still getting an honest connection and power and relaxation and a partridge in a pear tree.  That's going to be my goal until the end of time!  Good gravy, if only she knew where we were six months, a year, two years ago. 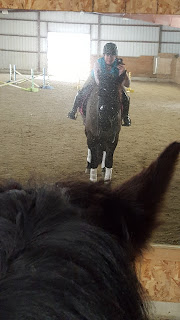 New types of selfie fail, need to get the mirrors cleaned

I figure if I can ride him with my trashed shoulder and feel no pain, he's not that heavy.  Yes, he braces, but it's passing and I'd rather work through it.  My NS bit is doing wonderfully and I see no need to change it when we've found something that works.  He doesn't hide from the contact but also can't lean on it.  I have no interest in having a bit of a 'drape' to my rein.  I need that line of communication to keep him on task when he's on his toes and being studly.  If I can get that in my snaffle?  Then okay, that's spiffy.  But I'm not changing gear to back him off, not when we've finally settled into a nice, consistent place.

But yeah, I would love to have him lighter.  Let's all be honest, I wouldn't have that moment of wavering if I didn't dream of him being lighter.  To have him skip the moment of bracing when I ask for something more challenging.  But who wouldn't want that?  I can get mechanical or I can be patient.  I'll be patient.  All things in their time.  And besides, I've got my hands full with asking him to lift that front end.  I can't manage that and a huge change in the way our (brand freaking new) contact works at the same time.  I'm not that talented.  This whole 'pick up your shoulders' thing is brand new to both of us, it takes a lot of focus.  I don't have the brain power to spare. 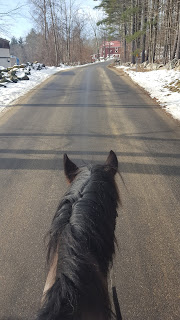 Working at home, I've been focusing on our lightness through transitions.  Mi papi has lovely natural brakes so I forget about the downwards a lot of the time.  Why practice what he's good at?  But Trainer A recently reminded me that downward transition does not equal fall on your face and stop.  We're back to drilling the downward transitions as much as the upward.  Once he's doing the transitions without hitting my hand, bracing, or throwing a fit in either direction, I can add in some laterals.  Same old game, if he has no idea what I'm doing, he'll rock back just so he can be ready for my next random request.  Skipping gaits really gets him sitting back.  Those simple changes will be nice one day.

I know it's working because he gave me a canter half passe in both directions without me having to get dramatic or beg.  I touched  him with my spur and he started to go sideways.  He was actually balanced enough to do it and since we do so much lateral work at the walk and trot, the concept was already installed in his brain.  He got so many cookies and pats. 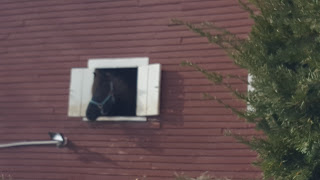 Observing the snow removal while waiting to finish drying

I'm not giving up on my Second level aspirations.  It occurred to me that I've got Second up on some sort of pedestal, this thing I want but can't do.  It's becoming a problem.  I start to think about it and almost automatically say 'no, we can't do that'.  So I'm just going to do it.  I'm going to do Second 1 at the start of the season at a schooling show.  I know the judge that's usually at that first schooling show, he knows me and my horse, and he's got a great sense of humor.  He stabled across from us at the regional championships and has taught clinics at the barn.  He'll be supportive of our efforts, even if we fall on our faces.  He's a tough judge, he doesn't toss points around, but he isn't cruel.  I think he would be very pleased to judge our first attempt.

We can do the whole test.  No one will be grabbing their pearls or gasping.  Our collection will come and go, I'll be tense because I have to sit through the medium trot, but it'll be fine.  We have to have our debut at some point.  Might as well get it out of the way.  Then we'll have nowhere to go but up.
Posted by Catie at 8:42 PM