So what do you do after you put your horse on a B vitamin supplement and he suddenly has energy coming out of his ears?  First you take him off the damn energy supplement.  Then you figure out that there might be something missing and you start to chase it down with all possible determination and resources.

I saw a review of FeedXL over on A Enter Spooking and thought that would be the perfect way to get Theo's supps in line.  I entered what he was on (minus the Ultrafire) and hit run. 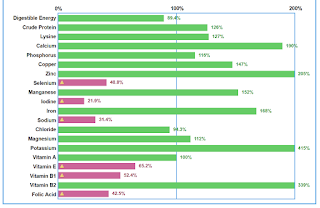 Looks like I've been making some rookie errors.  His four pounds a day of CarbGuard isn't covering his basic vitamin and mineral requirements, especially in winter when there's no grass.  Apparently a horse his size and in his level or work should be getting more grain than that if that's the source of vitamins.  Whoops.  This includes his B vitamins, his E vitamins, and selenium.  I did a lot of emailing to find the vitamin and mineral content of everything he eats, right down to his alfalfa pellets.  I'm pretty confident that I've got the full picture now.

After a full day of tuning and adjusting, I managed to turn every line green. 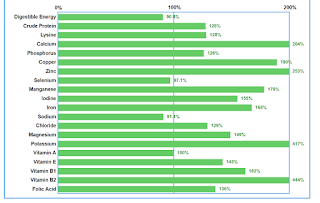 I've added a multi-vitamin to get his vitamins in line (SmartVite Perform).  That meant I needed to dump his combo supplement because it was over supplementing minerals.  Instead he's on a focused joint supp (SmartFlex Ultra) and hoof supp (Smart Hoof) to get his glucosamine, chondoritan, and biotin in line with the recommended values.  I left him on the muscle recovery because he is coming out less sore these days (SmartMuscle Recovery).  I added a vitamin E and selenium supp (VitaE & Selenium crumbles) since my region is infamously low in selenium and Standlee confirmed their alfalfa is from a selenium depleted area.  I also added an ounce of loose salt since his salt block keeps melting in the rain/snow.

Avoiding over supplementing is pretty much impossible for some things.  Why does every sup include potassium?  Seriously.  Zinc is also in every single hoof sup and multi-vitamin, so you're going to go over no matter what.  Doesn't do him any harm, just gives him some expensive pee.  This rebalance did almost double my supplement bill.  I'm going to look into Sunshine pellets as a ration balancer, see if I can get this bill back down.  Ouch.

I like the FeedXL app.  It's not free, but well worth a one month membership if you want to really dig into your horse's diet.  Most of the supps from SmartPak are already loaded and I found all of the feeds that are popular in my area.  There are some gaps in their data, but if you email the manufacturer to get the missing data, the developers will add it to the app very quickly.  It's fantastic for doing the math to figure out what ppm turns into and displaying it with the daily recommended allowance.  They have interactive graphs so you can see how much of each vitamin is coming from which source.  When looking at things like selenium and iron where toxicity is a concern, this made me much more comfortable that I hadn't missed a source.  They flag fields were they might not have data for a nutrient source so there are no surprises.

Their 'suggest a supplement' tool turned out to be really weak since it doesn't pay attention to the recommended serving size.  It will suggest supplements, but then you need to go see what a serving size is and see if it will actually fill in the gap at the recommended dose.  It was frustrating until I figured out that the tool was suggesting a double dose so entering a single dose didn't take care of the gap.

This might be the first time in Theo's life that he's getting everything he needs across the board.  Let's see how this plays out.  I may have to re-calibrate his workout schedule if having all of his vitamins is all it takes to turn him into a snorty beast.
Posted by Catie at 7:42 AM