State of the papi

I feel like I've been super focused on my training updates and haven't been putting enough attention on the actual star of the blog.  If someone had read just the past three weeks or so, you'd think a certain someone is some sort of serious business dressage horse that is heavily schooled.

Yeah, not so much. 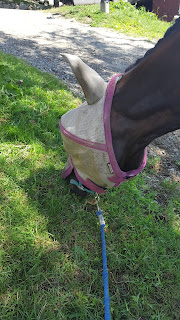 Mi papi is doing very well.  We still have a schedule of 3 dressage schools a week, including shows and lessons.  All other rides are hacks, fitness, babysitting his leaser, or jumping lessons.  Sometimes jumping lessons take the place of one of his dressage schools.  The bugs are still awful, but we cope.  Okay, we bitch wildly and go way too fast on the trails.  It's a form of coping.

Theo's getting a level of spoiling that shouldn't be healthy.  With summer camp going on, Trainer A has munchkins to groom, tack, bathe, and turn Theo out on his training ride day.  Theo is awfully pretty and friendly, so it's not a quick process.  There are much worse things in life than having a couple of little girls brushing his tail and rubbing his ears (because his owner showed them all how to do it correctly).  His leaser bought him the giant bag of Crack Cookies.  It's huge.  It takes up an obscene amount of space in my locker.  Theo is pretty sure she's the bestest leaser ever.

I've been taking the extra time to groom him till he's sound asleep with his lip drooping at least once a week and I'm trying for twice.  It takes me a full hour to groom him when I go all in.  He's got liniment and massaging and moisturizing the corners of his mouth and treating his hooves and . . . you get the idea.

He's been getting some days with two ponies for company and three fields to romp in.  Clearly one pony and one field wasn't enough.  To give his field some more time to grow in, he's been on established pastures with his tiny companions. 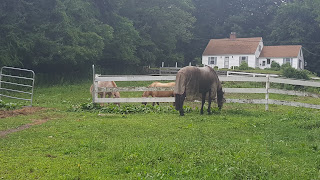 They make quite the trio.  Theo's not a friendly horse, but he has been spotted playing tag with the ponies and even letting them chase him.  Sometimes.  I'm happier when he's getting extra socialization and I'm sure he is too, even if the socialization is making sure they understand that everything is his.  Everything.

Soon the bugs will be gone and my new trailer will be put to much more enjoyable use.  My friends from my previous barn are clamoring for me to go trail riding with them.  I think it's a fantastic idea.  Just a couple more weeks until the bugs are gone.

In the meantime, we'll work on some other skills. 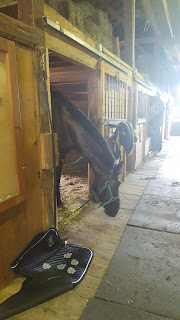 Respecting a stall guard is a very important skill.  So is posing for the camera. 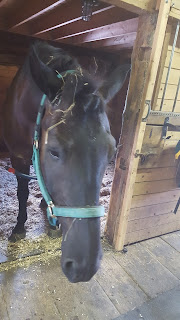 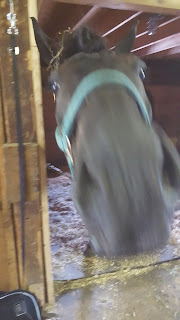 We're still working on that one.

Theo still drags me down to the ring and, despite our recent challenges, gets to work with minimal fuss.  He's spoiled rotten almost beyond words and hardly anybody can remember the days when he was the hated school horse.  Yes, his trailering schedule has been rather intense and I'm asking for more out of him than he's ever seen, but he seems to think we have a pretty good deal going on.  I annoy him for about an hour, but there's lots of cookies and pets in it for him.  And then a massage, his tail brushed out, and Crack Cookies before going out to torment his very own ponies.

It's good to be the papi.