Since I've dropped back in dressage levels and I'm not doing sanctioned shows right now, I'm getting Theo off the property strictly to keep his brain between his ears.  He's not a brave soul and has bullied many, many riders into not dealing with his nonsense.  His reputation featured his ability to spin, bolt, and jump out of rings for years.  So I loaded him up for a two phase yesterday.

After our excellent dressage lesson, I was pretty sure our Beginner Novice dressage test was in the bag.  Most of my concern was in the jumping part.  This show does tend to go full height for their fences and have some spooky fences (ugggh, that purple and pink chevron they always use for the two stride is a killer).  We had a jump lesson with courses on Saturday that Trainer A set up with vicious turns and some fences set up to Novice so our show course would look like nothing.  Yee.  Haw.  Theo was entirely on board and quite studish with the change in weather.  We had a really nice lesson and I remembered how to get around a course as opposed to look pretty. 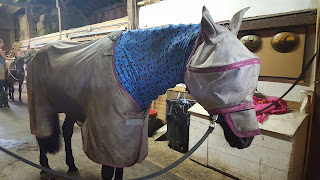 Show day dawned beautiful, windy, very low humidity, and about 15* cooler than it's been.  Unsurprisingly, Theo was rather up on his toes.  It's a facility he's visited many times, but he's kind of a dummy about rings not being the way he expects them.  The show was running late due to the dressage judge showing up late, so I took the announcers word for it, planned to be 40 minutes after my assigned time, and headed to warm up.  I wanted to work him for about 40 minutes and burn all of that excess energy off.  Twenty minutes into my warm up, I got told I was on deck.  Well.  Looks like they've done some catching up.  And since I'm already past my scheduled ride time, I can't tell them that I want to wait and finish my warm up.

I march my fancy dancy dressage pony over and start to go around the outside.  A large truck was moved to block the dressage ring from the cross country finish flags.  Go idea on the part of the show, bad idea from Theo's perspective because that big truck wasn't supposed to be there.  He went from nicely trotting to completely stop.  Oh, yay, my favorite game.  I now have to boot Theo past whatever has terrified him and then deal with the spin/buck/tension.  So I proceed to boot, Theo proceeds to inform me this isn't in his contract.  I get to the corner of the ring and he starts to spin around it.  He's feeling amped and rips a buck when I stop the bolt.  At this point the judge flags me down and tells me to come over.

I'll admit, I was ticked.  I needed to finish working that corner to end the situation before my test, but when the judge says 'come here', you smile and walk (physically haul protesting horse) over.  And she proceeded to lecture me about how to handle my frightened horse and how I should manage the corner.  So rather than dealing with the corner, Theo got to cuddle with the scribe while the judge lectured me.  No, I didn't tell her that my horse was being rude due to excess energy, not fear, and that the bucking was because I told him no for the bolt.  And then I walked him back to the truck, said 'touch it', finished our work, and went to the other end of the ring.  Because you don't know me, you don't know my horse, please don't interrupt my training.

Our test had some tension due to the all new corner of death and our entrance was a bit crooked since he was trying to stare at it, but the usual centerline sigh happened and he got a 27.1.  The video is super low resolution, not really worth sharing, but he does look very fancy and we got an 8 for gaits.  Got 5s for the movements where he went against my hand because of the truck, but 7s and 8s for a lot of other things.  If a 27 is a really bad day, I'd say that's progress. 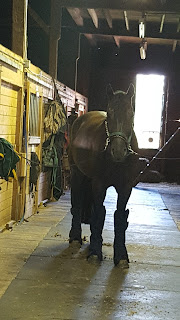 After his behavior in dressage, I changed to his jumping tack, hauled his butt to warm up, and made like a human lunge line for 20 minutes.  We just cantered and cantered and cantered.  Every time he'd look at something or scoot, I added more time.  By the time we were done, he wasn't looking at a thing.  He just wanted a nap.  Then I took him to jumping warm up.

He warmed up well, but was very surprised to go into a ring with jumps.  Refused fence 1 and fence 2, but then figured out what we were doing and gave me a really nice ride for the rest of the course.  I can accept that since he really doesn't show over fences much. 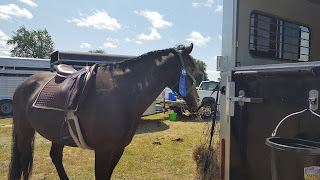 The odds were in our favor

I like getting a blue ribbon and a 27 in dressage.  I don't like having a sore back due to my horse being explosive.  I'm considering how best to manage this, since he's tried a spin/bolt attempt outside of the dressage ring at three shows in a row now.  It's a bit of a problem.  Some of it was excess energy due to the weather, but I'm seeing a pattern.  We're going to another dressage show on Sunday strictly to work on this.  My attempt yesterday was to put him on the bit, put him to work, and march him by in a shoulder in.  Backfired spectacularly.  He slammed on the brakes, but once I was walking (and had my lecture), he walked over on a loose rein to investigate.  So now I'm thinking a long rein walk in with him looking around may be the way to go and I'll pick him up once I'm past the judge's booth, the bell has rung, and we're on our way in.

Tonight I will be gathering beach umbrellas and big sheets to set up a spooky corner in the outdoor to practice.