I'm not sure if my horse was good or not.  It's a weird sensation. 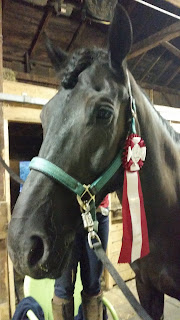 His leaser had done one, maybe two shows in her life.  When I heard she was signed up to do Training 1 and Training 2 at a sanctioned dressage show, I was rather surprised.  Really?  I thought it was a schooling show.  Steering and going is still a bit spotty.  But hey, it's a dressage show.  It should be fine.

But of course, Theo is his own beast.  He goes or he doesn't.  It doesn't matter what you do.  If he's not in the mood, you can forget it.  He jumps out of rings, spins, bucks, and generally does what he wants.  With me, he's figured out his job.  With Trainer A, he's sorted out enough of a relationship to go in and do his job, though it's still a bit spotty in places.  With his leaser?  Well, it's a much less balanced relationship.  She tells him to do things, and he usually does.  Because he likes cookies and pets and ear rubs and she doesn't ask him to do anything hard.  She demands nothing.

On Sunday, she asked him to do something hard and I wanted to puke because I was on the sidelines and could do nothing to help.  He'd never been to this show.  The whole thing was rather overwhelming for his leaser with a big, sweeping facility and official show secretary stuff.

He handled warm up like a champ.  Absolute champ.  Even when a horse nearly mowed him down, he coped and didn't give her a bit of trouble.  For that alone, we're all grateful.  She'd never done a warm up like that and the fact he let her manage traffic while he minded his manners?  Priceless.

Test one, he walked in very nicely.  Gave her one spook on the outside, but went down centerline like a champ.  He gave her one real spook heading toward C in the canter, but she booted him along and he coped.  The test was overall good with some piloting errors.  Her circles were too small, her focus points out of whack in the large arena.  He started to canter at one point, thinking he was doing a First level test.  Otherwise, he was very good.  He got a 57%, which was a fair score when her geometry was out of whack.  She came out smiling because she's pulled it off.

After a break we went back for test two.  Lo and behold, papi was tired and didn't want to play.  I knew because when we went to head down, he bulged out the left shoulder and tried to turn around.  He only does that when he's decided he's done.  Shit.  SHIT.  His leaser hasn't seen that behavior.  It's not easy to manage.  If you overcorrect, he explodes.  If you ignore it, he leaves.  You have to finesse him along.  Or correct him and take the explosion.

Trainer A was reading for his leaser and was able to casually walk with her into the ring.  Since they both had to go the same way, right?  And it was an opportunity class, everyone wanted her to have a good day.  When he started to refuse to go around the outside, his leaser did a great job of sitting through it and Trainer A quietly talked her through it.  They went down center line, halted, and he tried to turn again.  She booted him along, won the argument, and finished her test.  Steering errors and a seriously wonky entrance cost her points, but 54% is a lot better than an E.  She seriously needs to practice 20m circles in a large arena.  Theo defaults to 15m now and, well, he gets to drive a lot more with her than he does with me.

So was he a good boy?  I dunno.  Trainer A was pretty livid at his stunt at the start of the second test.  He's done so many shows, he has no excuse for that nonsense.  However, having sat and managed so much of what he can throw, he really didn't throw anything at her.  He was a bit spooky on one, a bit baulky on another.  For him?  That was pretty dang minor.

She has no connection or real control over his body.  It was a wake up call for me, how much he relies on me taking control and telling him to focus, that I had things under control, that he was safe because I say so.  He's brave because I am.  His leaser doesn't have that relationship with him yet.  He went around the ring out of nothing but the goodness of his heart.  The fact that he has a 'goodness of his heart' is actually quite new.

Was he good?  For him, yes.  He didn't try to dump her, attack anyone, bronc, spin, or be dangerous.  He was a bit of a jerk instead of a dangerous horse.  Was he good for most horses?  No.  He was looky in his first test and flat out quit on the second one.  I feel proud of his leaser that she managed him, got him turned around, and rode with finesse beyond her experience.

Will she show him again?  Yes, absolutely, she actually enjoyed herself.  He packed her through the parts she found scary and she didn't get rattled by his behaviors.  Because she walked in, he didn't have the power to explode outside of the ring.  She's scheduled to do a two phase with 18" fences in October.  That gives us a month or so to teach her the basics of managing Theo when he's trying to look around.  I didn't want to give her a scare before her show, but now, I think she's ready to have a bomb proofing lesson.  She realized she didn't have the right tools when he started to look because he never looks at home.  So time to add a new tool for her.

She's excited to take that next step in being a rider, to start learning to manipulate her horse's body.  So yeah, I think Sunday was a win.  And I think he was a good boy.  As good as can be expected from mi papi.