I knew I was jinxing myself, posting about how my horse is so good with the trailer and how well it's been going.  I got up on Friday to absolute downpour.  The forecast was for the rain and storms to continue all day and into the night.  Local flood advisories were going up.  But my lesson was already scheduled and I'd already taken the afternoon off from work.  Hell or high water (literally), I was going to my lesson.

I budgeted a lot of extra time since I figured the drive would be slow.  I arrived at the barn and tried to back into the paved parking lot.  Nope, not going to happen when it's raining so hard that my back up camera and mirrors are borderline useless.  It's an angle going down hill over uneven terrain, the trailer just was not going straight and I didn't want to hit the rock wall.  I gave up and went to my usual turn around spot.  I didn't want to turn my truck around in a pasture in the pouring rain, so I tried to turn around by backing out.

I'll just skip to the part where I got myself so tangled up that I ended up between two paddocks with no wiggle room and a horse laughing at me.  About this point, I realized that I am really not that good with the trailer yet, especially when all of my mirrors are useless.  I extricated myself enough to point my hood at the Ritz, opened the gate, apologized to Trainer A, and turned around in the Ritz like the rookie driver I am.  With four wheel drive the truck had no problem with it and fortunately left only one small mark.

I got all of my junk moved to my trailer without getting it too drenched.  I pulled in my rather wet horse, cleaned him up as best I could, and let the summer campers rub his ears while I put on his shipping boots.  I tried to wait for a break in the rain, but it just kept coming down harder.  I finally gave up, grabbed my horse, and headed down to my trailer.  Important note here:  I couldn't find a chain shank anywhere, so I went with a regular lead.  And his regular halter.

I dropped the ramp, said 'Up-up!', and walked him up.  He got his front feet on the ramp, stopped and backed up.  Huh.  He does that sometimes.  I shrugged, turned, and started over.  Nope.  He suddenly decided that he does not know anything about loading into a trailer. 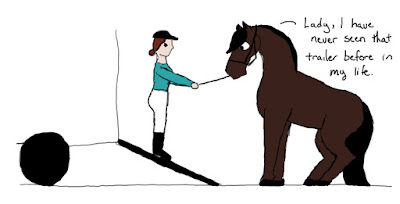 I did figure out that it was the absolutely torrential rain on the roof of the trailer.  It sounded like a freight train in there and papi wanted no part of that.  But I had a lesson to go to, so we spent about fifteen minutes getting his butt on that trailer.  I eventually got some help so they could grab the butt bar (and lend me a chain shank).  I was ten minutes behind schedule, absolutely drenched, and my horse was throwing a temper tantrum in his trailer.  Great.

I hit the road, dropping down as far as 35mph in a 65 zone when the rain was just unbelievable.  And all the cars around me were doing the same, so I know it's not just me.  I managed to still make it to the lesson with 20 minutes to tack up.  Mary is really sweet and let me park my wet, upset horse in the aisle to tack up.

After all of that drama, I was not expecting much from my lesson.  And Theo has been rather studish this week.  I think the mares are cycling and I looked back at my August entries for the past two years.  He always acts up this time of year.  It's little things, like being a bit too quick with those front feet and looking to bite when we'd mostly stopped that behavior.  He didn't want to focus and was giving me little temper tantrums while I walked and warmed up for Mary.

In the end, we had another good lesson.  Once he stretched and started working, it was okay.  It wasn't his best, but as Mary said, she doesn't want to see him at his best.  She can help more if he's at his worst. And as Theo's worst is being distracted and some head shakes, I think Mary is starting to actually like him.  She was very happy with our work on stretching and the much more honest, even connection.  She tested us with some leg yields and while we've got work to do, he can now leg yield neatly without bracing through his neck and throwing his head up.

Our new focus is going to be the push.  He doesn't have enough thrust right now.  His neck is now lovely, the connection is an actual thing, so now we're putting all attention on the hind end.  A lovely connection is worthless if there's no energy coming forward.  She described him as having this big gap in the middle and the energy isn't cycling from the hind to the bridle.  It has to cycle or nothing works right.  His trot is currently his natural gait, the one he chooses.  It's not a working trot.  He needs more push and not because I'm begging him.

First exercise was a lengthen canter right into a 10m canter circle.  Papi did not like that much.  The reasoning was that he doesn't have enough oomph to do a 10m canter circle right now unless he comes in with some extra power.  Getting him to come back without breaking to trot is doubly hard when he's in a bad mood and wants to suck behind my leg and stomp his feet.

Mary nodded, got up, and picked up a lunge whip.  Wuh oh.  20m circle, trot - canter - trot, with a little outside influence to get him in front of my leg without me begging for it.  She wanted me to feel the correct transition with no hop or head pop.  I have to say, the powerful, correct transition?  That's something worth working for.  It felt awesome, and frankly, I think Theo enjoyed it himself.  Once he was actually up in front of my leg, we went large.  Mary would get behind him in the corner and help drive him forward into a lengthen trot.  And we never came back down.  We just added and added, pushing him to really find what he can do.

By the end, he was over tracking by about half a hoof print.  Mary's sure he's got a medium in him which by her definition is overtracking by a lot (it looked like a foot, she put her hands up about that far apart), he just has to find it.  He was puffing hard after that trot work.  I can't remember the last time I felt him stretch and push like that and certainly not down a whole long side.  I may have never felt it before.  I can't do it on my own currently, he just says no.  So we have been assigned fitness for our homework.  Yes, work on the connection and softness and transitions, but mostly go forward.  Not our current forward.  More forward.  Still more forward.  Take him out for a gallop, do hill work, jump, raised trot poles.  Anything that gets him forward and using his hind end.  He's too weak right now, he needs to be stronger and his cardio needs to be better.

Well, gee, that I can do.  That I know.  And I'm sure Trainer A will be more than delighted to chase us with a lunge whip to assist with our trot sets.  Gallops and hill work and gymnastics are a go!

I told her about our schooling show and getting an 8 on a stretchy circle.  She said 'See?  Stick with me, kid, I'll get you through this'.  She also reiterated that I'm not to show First right now.  When I go back to First, she wants us completely confirmed in the bridle, in the impulsion, and in the movements.  I will be going back into the ring to win, not to get a 60%.  Which is kind of a new world for me.  Me?  And Theo?  Winning at shows in New England?  I'd never considered that.

This is what I needed.  This is so simple for her.  She's been doing this longer than I've been alive and for her, getting a perfectly reasonable horse ready to go First is bread and butter.  Well worth driving through a monsoon.
Posted by Catie at 7:07 AM