Poor Theo is living in downtown and he's not loving it. 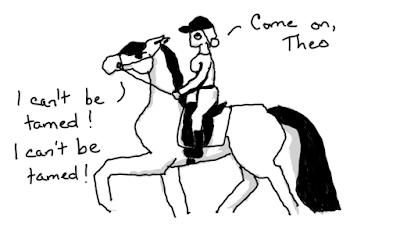 As assigned, we've been working on Theo's reflex of popping his head up when I take up the contact, when he hears something, when someone talks to him, when he sees something, when the wind blows, when the sky is blue, and when he relies on oxygen to fuel his metabolism.

Seriously, now that I'm working on it, this horse just likes to stick his head up in the air.  I gather the reins and his head pops up before he settles into a nice feel.  Can we just not do the pop up bit?  Theo says no, it's required, it's in his contract.  He also says no to stretching down in an honest way, since that's much harder than doing transitions with a head pop.

We got one transition today that was just awesome.  He was trotting perfectly chill with a nice stretch down and I asked for the canter.  No pop, no tension, just a big lift in the shoulders.  It was one transition in twenty, but it's a start.  Working with his head down is requiring him to use new muscles so we're having to take a lot of breaks to avoid massive negativity.  When he starts to get tired, he'll play fun games like twisting his head or curling back behind the vertical or rushing.  That's usually my cue to get a good transition so I can give him a break.

He's not honest in the stretch right now and frankly, we're weathering the temper tantrum part of the cycle.  It's dawning that he must now flex AND stretch at the same time.  Mi papi does not think this is possible or a good idea.  Sure, stretch down, but also flex correctly?  Relax?  Chew?  Nope, nope, and nope.

Bit Butter actually works, btw.  When I use it, he does tend to work the bit more and it's in a positive way.  I'm not sure if it's just that the corners of his mouth are more comfortable or he likes the taste of it on his bit or the texture it creates, but it does have a positive effect on my lock jaw pony.  It's also a fantastic lip balm for me.  I love sharing stuff with my horse.

We're also working on the basic concept that he can't quit working for every little distraction.  A horse he knows walked into the ring and he threw his head up to watch.  We had a discussion about no, you keep working.  I didn't notice his distraction so much when his head was already up there.  Now it's being thrown into laser focus.  Explains why I have trouble getting him to focus while trotting around the outside of the dressage ring.  Error appears to be between reins and saddle.  Hm.

But with lots of pets and rewards, he's coming around.  He hasn't thrown any temper tantrums as grand as the one where we taught him to flex.  I'm being very careful to give him lots of pats when he gets things right so he doesn't get negative.  When he starts to tense, I have to lure him into success and then reward heavily.  Then his ears start flipping around again and his jaw starts moving.  If I forget to pet and give him those verbal rewards?  He starts flipping me the bird damn quick.

Fortunately our show on Sunday is Training 3 and First 1.  Nice, easy tests.  It's mostly about calmly going in the ring and doing the job, not about the test.  Which I think is going to be my grand lesson from this season.  A test for show should be ready for more than survival, because gods know I've got my hands full just showing up.  Half of my brain is completely occupied with managing my partner and his swings between terror and needing a nap.