There are a lot of four letter words, but I'm coming to find that there is one that carries a lot of weight. 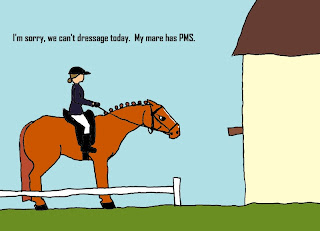 As anyone that's been following along for awhile knows, Fiona is my first partnership with a mare.  I avoided them for years and years because of the moody reputation.  There's only room for one bitch in this relationship, and I called dibs.  I made an exception for Fi because she's so sweet and such a pocket pony.  She doesn't squat and squeal at the boys and is happy to be touched and groomed any day of the month.

However, she can be very adversely affected by her hormones.  She gets cramps when she ovulates and she gets distracted when she's in full blown heat.  She was once so busy looking at a boy she actually ran into a jump standard.  I was embarrassed, and so was she.  For the first year, we just got to know each other.  There was no way to know what was hormones, what was training, and what was just the princess.  In the second year, we stepped in when her spring heat cycles got wild enough to make her a danger to handle.  A monthly progesterone shot levelled her out dramatically.  The cramps were no longer an issue, her attention was on the game, and she had a terrific season.  Her first show on progesterone was her outing with my trainer at UNH where she got second in Beginner Novice and won the dressage.  Then she started campaigning with the junior rider and I had my best finish with her at Novice.  The mare was an eventing machine!

But there were problems.  While the depo prevented her heat cycles, each time we used it the period of time it lasted shortened.  Her heat cycles when she did get them were stronger.  By September, I was rearranging her injection cycle for every other week with the vet because the shots were wearing off in about two weeks.

By November, she got a shot on the 8th to make sure she wasn't in heat for Equine Affaire.  She was stabling with stallions, I did not want to deal with that level of distraction.  She was in a screaming heat on the 18th when we moved her to the winter barn.  Between her heat cycle and the stress of moving, she was completely beside herself and screaming while running the fence line.  While riding her in the indoor with Dorkzilla, she was still calling and jigging about.  The 'monthly' shot isn't even making it two weeks anymore and her heat cycles coming off the depo are definitely an ordeal.

She's officially off depo now, since it's just making a bigger mess of things at this point.  After a ride yesterday that had me in tears due to her resistance and distraction (again, in heat), the decision has been made to try Regumate.  Suppressing her heat cycle with progesterone was a huge success, reducing her pain and stress.  We just need a new way to get it into her.

She got a 54% on her First Level 3 test today.  The same mare that can get a 61% at First Level.  It was a lot better than yesterday when I wouldn't canter a left lead circle of any size, but her hormones were still slightly out of whack and she hates rounding her back when she's in heat.  Basically, she was PMSing.  Pissy and crampy and generally not thrilled to be working.

I can't give her chocolate, Pamprin, and a bubble bath, so we'll have to just stop the symptoms before they start.  I'll buy a three month supply and we'll see how she reacts.  I'm hopeful, because right now?  I don't have an eventer and I don't have a dressage partner.  It's a very, very frustrating position to be in.
Posted by Catie at 11:15 AM