How many masters degrees does it take to set up a Regumate dosing system?

After much fussing, debate, and consideration, Fiona is officially on Regumate.  For anyone that's not familiar with it, it's alternogest (synthetic progesterone) which will keep her from cycling.  It should have the same effect as the injections but since it's dosed daily, it will be a steady level of hormones rather than surges.  It goes on her morning grain, easy peasy.

It's an oil solution that can be absorbed through the skin.  It's even been known to go through latex gloves.  If a human female gets it on her skin, she'll get her period and it will probably hang around for 2-3 weeks.  It's also a possible carcinogen.  Fun stuff, huh?  And it's freaking expensive.  Keeping all of this in mind, and the fact that I really like the barn staff, Fiona's bottle of Regumate was delivered with a lot of safety equipment and a very precise procedure that I wrote up with my trainer's head girl.

A fancy dosing gun was hooked up so that all they have to do is squeeze the trigger and get 10mLs dosed onto her food.  I did the set up of the gun and that's the part that required multiple masters degrees.  The instructions were just stupid, but we successfully got everything set up without shooting hormones all over the tack room.  I looked like I was conducting surgery, wearing black nitrile gloves, reading instructions, and with spectators staying at a cautious distance.  We hooked everything up in the sink in case of disaster, then transferred the bottle and dosing gun to a little bucket.  The bucket and a box of industrial strength nitrile gloves now live in the feed room. 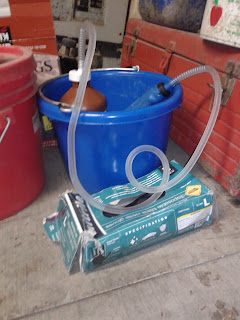 The gloves are from when my husband is working with chemicals that he really doesn't want on his skin.  They're tougher than latex and we don't have to worry about any of the staff with a latex sensitivity.

There's a writeup in the feeder's notebook about the proper way to dispense the goo into Fi's food, complete with a warning about what happens if you get it on you.  Her breakfast now goes in a bucket with a lid so they can dose her food, then just haul the grain to her stall at feeding time rather than moving the Regumate setup.

It's all kind of ridiculous, but better safe then sorry.

After all of this nonsense, it was just Dorkzilla and Fi in the ring.  The dentist had been out, so I was just goofing around with the princess in a hackamore.  We practiced jogging and neck reining at the canter.  It was nice to have a complete slack off ride where we did silly, silly things that had nothing to do with getting ready for a competition.  Unless we decide to go show Hunter Pleasure.  You never know, we might decide to branch out this summer.

Fi appreciated the change in pace.  No stress, no muss, just goofing around with a friend.  I've got to remember to do this more often.  It's not about competing. It's about having fun.
Posted by Catie at 11:17 AM