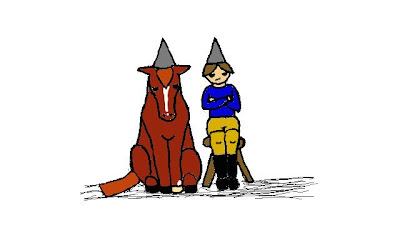 Yup, that's us on jumping weeks.  Class clowns, sitting in the corner with our dunce caps on.

Not too long ago, Fi and I could keep up with just about any lesson on jumping week.  Now?  I move around my lesson time to find a class that's doing cross-rails.  It's easier on the trainer if she doesn't have to move between 3' verticals and little 12" X's.  But we've made solid progress since our last lesson a week ago and I felt more confident going into today's lesson.  I only hyperventilated a little when I realized that the class had been rearranged and I was in with a couple of Novice horses and riders.  Best laid plans of mice and men and all that.

It helped that I knocked off those first couple jumps before the trainer came in.  I get nervous when I'm being watched.

Between the hackamore, the grab strap, my running around like a fool, and the bag of sugar cubes, Fi's getting her confidence back.  My trainer was thrilled with her calmer attitude and pointed us at some 2' verticals and even a couple of 2' oxers.  Fi didn't bat an eyelash and trotted over them as mannerly and confident as she's ever been.  Woohoo!

Of course, we're halting and walking between fences still, but having her jump a two foot oxer with loops in the reins was a huge, huge accomplishment.  The reasonably polite stop after the fence was also a big accomplishment.  No mouth gaping and head tossing.  My trainer announced we were done with that and we made our escape before the bigger fences and other horses jumping could key the princess up.

The trainer is thrilled with the progress and wants us to keep marching on as we have in the last week.  She said that it was the first time in awhile she's seen Fi's face so calm and confident.  She was almost, dare we say, eager?  Maybe, maybe.

This means loops in the reins in front of the fence, positive encouragement at all times (no punishment allowed), a grab strap to make damn sure I don't take back on my approach, and a hackamore.  It also means running with my mare a lot.  I tried lunging her over some ground poles to save my ankles from all of that running but the lack of boundaries fried her brain.  She'll run with me anywhere and over anything, but on her own?  Nope.  She has always borrowed the confidence of her rider and she's not ready to handle obstacles without support.

The saddle fitter was also out.  The jumping saddle passed with flying colors, as always, but it had some ripped lacing on the pommel so I sent it off for repairs.  It's 8 years old now, it was due to have some work done.  Unfortunately, the dressage saddle got a huge thumbs down.  Fi's back is now rather wide and the curvy, older style panels just aren't going to cut it.  The saddle fitter's exact words when I put it on Fi were 'Oh My God'.  We tried a couple models on her to see what works now and can you believe the saddle that fit her best was the one that Dorkzilla goes in???  This mare is NOT a pure Thoroughbred.  A lot of speculation has gone on about her back end as she's filled in and increasingly the jury says that she's part Quarter Horse.  Just the way her hip is put together reminds me of some HUS horses I've met.  They're 7/8's TB, but still registered as Appendix Quarter Horses.  She is a bit downhill, and the way that neck ties into her shoulders . . .

So, if anyone's got a Niedersuss Symphonie lying around, it looks like I'm in the market.  17 1/2 seat, medium tree, petite flaps (that's so damn embarrassing).  The old Passier is being sold off.  Damn that mare and her expensive (but really good) tastes.  I'm probably going to have to buy this saddle new to get the petite flap.  I'm currently without any saddles with the only one that fits her being repaired and am having to beg/borrow/steal for lessons.  I have a ride/critique/ride this Sunday for my First Level 3 test.  I'll be stealing my friend’s Toulouse for that ride.  I also suspect I'll be doing a lot of bareback work.  It should be good for me.  I got a book by Mary Wanless as a gift and I'm really hoping to improve my position this winter.  The lack of a saddle should help me on my way.

Hey, I'm trying to see the silver lining in all of this.
Posted by Catie at 7:58 PM