I do love that mare

So we had our second dressage lesson today. I don't know what it is that makes me so dang nervous when I'm taking Fiona out and doing anything. Everyone knows she's a former pasture potato that I've had for four months, they are not going to be expecting Grand Prix level work. That doesn't change the fact that I definitely had the butterflies when our lesson started, and we actually had to work on exhaling for the first five or ten minutes. It might not have been noticeable on me, but the princess let everyone know anytime I was anxious or tense. That head flip is hard to miss.

Today's theme was 'gently but firmly ask her to do her job'. She can be such a hot tamale, I fall into the trap of backing off when she protests. As I was told today, sometimes she just needs to learn to deal. If I sit correctly and ask her to pick herself up, I should not stop the command because she protests. I should push until she does it, then reward her. Again I was waiting for the explosion, but it didn't come. When the head tossing didn't work, the princess decided I was serious and got serious to match.

This is the first time she has actually broke a sweat since we moved to the winter barn. That should say something about how hard she was trying by the end of the lesson. Our canter work is still shaky, particularly around the departs, but I know there were steps of real self carriage in there. The canter is going to be the last piece to come together, but there was a lot of progress made. I was given the tools to use over the next month to try to fix our departs. It should not be head to the sky for the first two strides, then a nice canter. She has to learn to strike off like a lady. Her balance issues are interfering, and I spent a lot of time focusing on feeling where her body was so I could get her appropriately balanced.

Everyone says it, get the hindquarters engaged and the front end will just fall into place, but it is still awesome to observe. While I was working on getting her to sit on her hocks and be supple, the front end just came into line with a beautiful frame. She has such a long neck, the training level frame looks very good on her. The clinician asked me what my goals were with her, and I found myself blurting out '2nd level'. I did 1st level with my previous horse, so 2nd level seems like a doable goal. Fiona certainly has the mind for it, and my clinician seems to think she has the movement to pull it off. 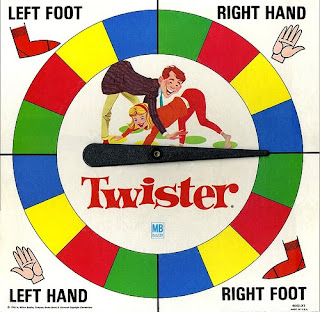 As much progress as was made, I have to admit, I felt like I was playing Twister at some points. 'Lift your ribcage on the left side to help keep her from popping up your right hip, now press and release with your left thigh but hold the circle with your right, outside rein to inside hip, exhale . . .' And that doesn't even include the instructions for where to place Fiona's four legs. Dressage is hard work! Who knew?
Posted by Catie at 9:39 PM