How many weeks until spring?

Yes, this is a dead horse, but I'm going to beat it some more. 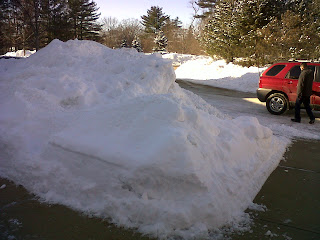 The view from outside of my apartment this morning

When is spring?! I know it's only January 22nd, but I'm starting to lose my mind. Fiona has her heavy blanket on now due to sub-zero temps in New Hampshire where she lives. I seem to be wearing long johns with everything, including my work clothes. Nothing says professional like tromping up to your office with snow boots. Sure, I change into my proper office heels once I'm inside, but it never fails. Some big wig always sees me when I'm looking like a hobo with a snow boots and slacks.
It's less the cold than the sudden piles of snow everywhere. It's hard to cross intersections right now because the snow banks are higher than my car. It's like driving blind. The problem is compounded for my dogs. I have probably mentioned the two Miniature Pinschers that rule my apartment. 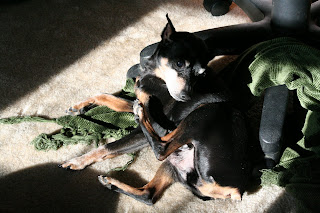 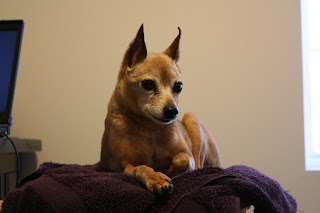 The problem with several feet of the white stuff being piled everywhere is that my dogs are only twelve inches tall. The red one, Cowboy, doesn't mind the snow much. He'll leap into it and do his impression of a bounding bunny. Cruizer, the black and tan, is much more sensitive to cold and is usually holding one (or two) feet in the air and crying within two minutes of being outside. Both of them are getting up there, and the older one (Cruizer) has some neurological issues, so ice is not their friend. Potty walks have been timed in seconds as of late. Poor little guys. At least they have all day turn out in my living room. Nice part about little dogs, my apartment is the equivalent of having a couple acres to play in.

I'm trying to will myself to brave the elements and go out to see Fiona. She did some lovely work for my yesterday and one of the teens hopped on her for a bit so I could see her progress. I'm starting to see much potential in this one for the lower level dressage. Jumping? Not so much. Lets just say one of my classmates in my last jumping lesson was practicing her deep, calming breathing. While watching us jump.
Posted by Catie at 7:56 AM