I was working on my show schedule and realizing that it was going to cost me money.  Like four away shows kind of money.  So I looked at my bank account, sighed, and started trying to figure out where I can pinch some pennies.  Then a wild, crazy thought occurred to me while flipping through prize lists.  I was lamenting the fact I can't borrow my friends RV because I will already be driving my truck and trailer.

My shows are awful for lodging.  It's either very expensive or very far away.  I've lodged 40 minutes away from a show before.  Normally riders can split costs to save and be closer, but I'm an army of one.  When the closest place is $259 a night, I'm going to be looking at $900 just in lodging for a show.  That's not realistic.  So instead I have to be way too far from the pony.  That also sucks around night check time and breakfast time.  So why not stay on the grounds? 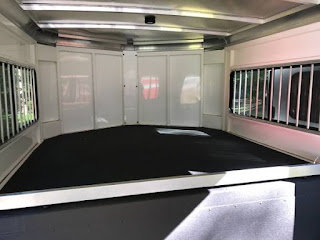 My bedroom for the 2019 season

For three of my shows, that should work out.  NEDA Spring, NEDA Fall, and the western dressage championships all have camping options at the show grounds.  GMHA is infamous for not allowing camping, but I've actually got a group of friends going to that one and we're renting a house 10 minutes from the show grounds.  Close enough.

So I'd sleep in my gooseneck.  It's easier than popping up a tent and roomier than sleeping in the cab of my truck.  Better noise control than sleeping in a tack stall.  Safer if a storm blows through compared to a tent (and I'll be able to lock the doors).  With an RV hookup, I'll have electricity.  The engineering husband is in charge of setting me up to use the RV hookup as a power source.  220v into my phone seems a bad idea.  He's convinced I need a generator, but he's prone to over-engineering stuff.

This . . . could work.  It will cement my status as the hobo dressage queen of New England but whatever.  I can pay $150 for the five days I'll be at Saugerties or pay $300 for lodging twenty minutes away.  I'm comfortable camping, I do it all the time.  Hell, it'll be luxurious compared to having to actually put up a tent and haul things around.  Weight won't really matter.  I can pop up a shade canopy, set up a grill, and chill out.  I can zip into town for dinner or more supplies while being close by for night check.  It will save me the morning commute time as well, getting me more sleep. 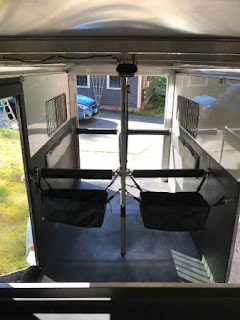 All of this stuff pops out, so it's a blank slate for storage, a shower, whatever

First step will be to insulate the trailer where I'll be sleeping.  Because it's open, I'll put a curtain in so I can close my section to keep the heat in when necessary.  My super open trailer will work well for camping because I'll have lots of room for storage (and a cowboy shower).  After I do this once, we'll see if I go any further than raw basics.  I could easily add a rough living quarters to my trailer.  Nothing luxurious like you see in the big slant trailers.  I could have a bed, some storage, a camping toilet, a cowboy shower with a propane heater, some lights and outlets that are wired to take an RV hookup, that sort of thing.  A chest of ice with some food, a camp stove, a french press for my coffee, and I'll be all set for a five day show.

This also contributes to my madcap plan to start looking for other people like me, the soloists.  The ones hitting the big shows without an entourage.  I want a tack stall so I don't have all of my crap in the aisle, but it's ridiculous to have one for one horse.  So what if I find some other people that are doing this alone and also want a tack stall?  What if we stable together, share the tack stall, and split up some of the work?  I can volunteer for night check since I'll be on the grounds anyway.  And for NEDA Fall, we can share a paddock.  There's no way I'm going to take Theo to a show for that long and not get him a paddock.  I like living.

Cutting out the lodging and some of the food expenses will help keep me afloat this season.  I won't have a trainer or any grooms, so those expenses are gone.  I'll be trailering myself, so that's about as cheap as it's going to get.  So long as I don't go too crazy with my entry fees, I should be able to keep this under control.

Though I might need a golf cart rental for NEDA Fall.  That place is huge!  And it looks like fun.  I've got to allot some fun in the budget.
Posted by Catie at 5:01 PM