No reason to stop

So I had my lesson with the Grand Prix student of Mary Howard today.  I won't lie, I was a nervous wreck.  I was so worried that I would be told 'nope, he isn't there' that I didn't each lunch.  I showed up at the barn early because I couldn't focus at work anyway.  I dressed him up with polos and braided his mane up and out of the way so his neck was actually visible.  Fortunately it was 40* out so he didn't want to double barrel me for taking off his blankets.

Trainer Z, as she is now officially dubbed, has been a working student of Mary's for nine years.  She owns a stallion that she brought up to Grand Prix.  Her stallion's barn name is Muffin.  I started laughing and she explained that he used to be quite scary and she needed the cutest name possible for him.  So he's Muffin.  She was a grade school teacher but this year, after the birth of her first kid, she's decided to go all in and be a full time trainer.  She's fixing up a barn on her property for her own horses and traveling around to teach and train horses for other people.

We had to delay the lesson a bit as Trainer A warned us that two of the hot heads were in the arena together, losing their minds.  We waited ten minutes while I introduced Trainer Z and Theo.  Theo decided she was acceptable as she was quick to adore him and give him many, many scritches under his braid.  She did remember him from our visits to Mary's barn, but didn't remember any details about him except his browband.

I am so that rider.

Her conclusion?  He's very sound, has three perfectly nice gaits, and is very nice in the connection now.  She loves the way he foams up the bit.  She was surprised that such a big guy with his cold-blood breeding was as forward as he was.  That's about the point where I started to breathe again. 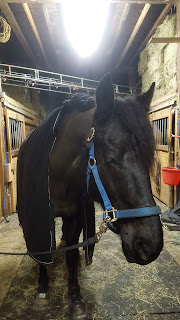 Then we discussed what needs to happen to make my 2019 goals a reality.  For the next four weeks, we're going to see just how forward we can get Theo.  He should be expecting to jump forward at any moment and offering to do it, not waiting for me to suggest the idea.  He needs to go forward to the contact much more.  Yes, he's round and soft and lovely, but there needs to be more if I want to move up.  More jump, more power, more forward thinking, more strength.  The first time I feel like I have to hold him back a bit instead of driving him forward, I'll know I'm where I'm trying to go.

Unlike last time someone decided I needed to get him far more forward, I could actually do it this time.  He was a bit mystified by my sudden insistence on massive power, but we could actually do it.  Big, big trot with a nice neck, sitting on the outside rein and giving the inside rein so he had somewhere to go.  Big canter.  Even bigger.  Big enough that you're almost afraid of what you're creating.  Then stay there.

Holy crap, that's scary because I know what's under the surface, but as I keep reminding myself that's distant history now.  His eyes and ears stayed soft.  He went big in the canter and after thinking about it once or twice, decided to stay with me and put all that excess energy into a big ass canter instead of blowing his top and pulling a porpoise.  Then we leg yielded in trot and canter without losing all that forward.  And then we did transitions (BIG transitions) in the leg yield.  Never ever let him suck back, he needs to mentally shift to this being his new normal, where he expects to be.  Because this is how much energy I need to successfully collect.  All the foundation pieces are there, we just need to add the power.

She loved him.  Straight up loved him.  We did some walk to canter and she said 'wow, he's better at that than you, he's going to have a gorgeous pirouette'.  I mentioned that we struggle with positive tension becoming negative tension.  She laughed and said 'yeah, you're definitely ready for Second'.  He swapped leads on me and we had to get into the nuts and bolts of how I ask for a lead.  It's from the hips, not my legs.  He's sensitive enough, if my hips aren't there, he picks up the wrong lead or tries to swap.  Oh ho, so that's what that mystery issue is when I know damn well I mis-cued but couldn't figure out what part of me was moving wrong.  He will ignore what leg goes back if I have the wrong hip forward.  He's a very, very smart horse.  And I'm a very freaky rider that can push my hip forward while taking my leg back.  So weird, but at least I know what I'm looking for now.

So yes, Second this summer is totally green lighted.  And frankly, she expects us to hop along to Third pretty quickly.  We've got all the building blocks, he just needs more strength and that will come from all of the forward that's going to happen over the next four weeks.  Once that's established, we'll collect him and he can start really building up that booty of his.  She can't wait to put a pirouette on him since she expects that will be a highlight for him.  Which means, of course, that we won't stop at Third.

She said 'there's no reason to stop at Third with this horse, no reason at all'. 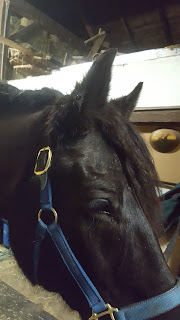 He was thinking so hard his ears got sweaty

I probably looked like a stranded fish for a second.  I'd braced myself to be told that he'd already hit his ceiling.  Instead, sky's the limit.  No matter how hard we pushed him tonight, he stayed with us and worked.  No resentment, only one little buck while getting the big canter started, no curling or fighting my hand.  Dare I say he enjoyed using his body that much?

So yes, Trainer Z will be back.  This is the perfect time of year to rack up lessons and form new habits.  Come May, when the show season starts, time will be scarce and I'll have more trouble finding a regular time.  But by then we'll hopefully have this paradigm shift completed and less regular check ups will be fine.