It started out fine.  I dressed him in his western gear while I fiddled with his saddle to see if I can make it work for me, we warmed up, and then I put my leg on and said 'big trot'.  He humped his back at me and tried to haul the reins through my hands.  Uh, no, go forward.  Big trot.  He decided that he no longer had a big trot and started breaking to the canter.  I said fine, if you want to canter so bad, big canter.  The wheels came off.

All of a sudden the window at C was terrifying and he flew off of the wall in his patented spin/buck/bolt combo.  I had to stop the bolt for safety reasons but immediately applied spurs to ribs and sent him back into his big canter.  He dove down on the bit and started popping his butt.  Haul his head up, get way in the back seat, and continue to push.  No relief until he goes forward, no matter how much he threatens and twists and bucks.

It was not a fun twenty minutes.  He was flat out looking for a way out of this work and when in doubt, try scaring the rider.  Bucking and bolting is a great way to get someone to take their leg off.  I had to keep my leg on even with him bucking and diving sideways because I know I need to get through it or it will be worse next time.  I used some circles to keep the bolting at a reasonable level and micromanaged his left shoulder to keep the spin from happening on his strong side.  He'll spin right, but it's slow and not very committed.  If he spins left?  I'll be spitting out arena footing.

After twenty minutes of loud protest while I made him transition between big trot and big canter, he decided that he was tired and just wanted to stop.  We got one lap around the arena with a big, well behaved canter on a soft contact and called it a day.  He was blowing like a freight train and I was coming down from the adrenaline that comes with sitting on a barrel of TNT.  Nothing else was going to be accomplished after that, so we went for a walk in the snow. 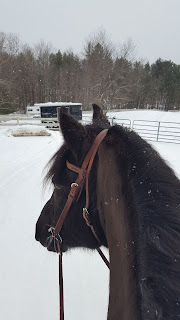 By the time we'd moseyed around the property for half an hour, we'd made up and his ears had gone soft again.  No more spooking and spinning, even when we went for a walk down the road.

Today he has the day off.  I knew this was going to happen so I planned out his rides accordingly.  He needs today off to mentally reset and rest what are probably some sore muscles after that nonsense.  Hopefully that was the wall and we're now through it.  Tomorrow Trainer A rides him and she'll happily kick him up as far in front of her leg as possible.  Thursday is his lesson with his other rider, so that will be a bit of a slack day for him.  I'll jump him on Friday to make sure all of the negativity has been shaken out while still getting him super forward.  Trainer Z is in the area on Sunday so we're going to have another session to check on our progress.  I'd like to have that lesson be something more productive than watching my horse throw a temper tantrum over these new rules.

I have my lumbar support pillow and a Salon Pas patch for my lower back.  I thought fifteen year olds didn't do this nonsense anymore.
Posted by Catie at 6:47 AM