Once you've accepted that you own a land porpoise crossed with a yak, you start to manage it. 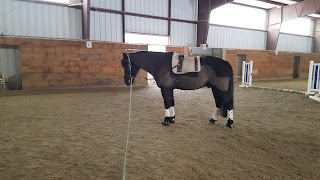 Trainer A did manage to sneak a lunge session in on the Wednesday before the Polar Vortex so Theo only had a couple days off in a row but it was a week of minimal work.  I decided to play it safe and stick him on the lunge and let him shake it all out.  Side reins usually keep the nonsense to a level I can manage without wrecking my shoulder.

The teens were frankly disappointed by the show.  Can you tell I dropped the lunge whip to manage my phone for the video?  Explosive and electric he was not.


I would have been totally fine if I'd just hopped on, but a day of working on the lunge is not a bad thing.  We worked on transitions, him paying attention, and I got to really watch his gaits.  Interestingly enough, he prefers his right lead when lunging.  Is that because I'm not on him or because he's on a circle?  Hmm.  But once I actually got him moving, he looked quite good.  Still better left than right but that's just papi.

On Sunday I dressed him up and hopped on. 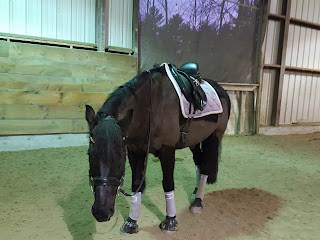 Seriously looks good in any color, glad I splurged on the matching polos

I freaking LOVE that color on him.  Finally have some purple in the mix, even if PS of Sweden calls this color Minimalist Gray.  It's lavender and he rocks it.  The new browband is a waste of time when I have his forelock loose.

We got some nice work in.  The land porpoise appears to be on the way out and I was able to get him to focus.  I'm still working on that canter, specifically being able to shape him.  For a horse that generally likes to bring his haunches in for the canter, he's quite resistant to the idea of doing a haunches in during the canter.  I did some haunches in and some shoulder in as prep for our continued attempts at the canter half pass.  He's got the idea, but it's hard and he tends to fall apart.

I've really been sticking to the idea that we're traveling on a diagonal in a haunches in to keep me from doing the dumb during this movement.  As he gets stronger, we're getting more successful.  I managed to half pass left to the wall and when I changed bends, he popped the change.  Good boy!  Many cookies and called it a day with that one.  It's rough and not at all fluent, but the little light bulb in his brain is starting to flicker.

Today it was 50* out so I had to keep it light.  Even with a clip, he was starting to pant after only 20 minutes of work.  So we got our canter exercise out of the way and went for a wander. 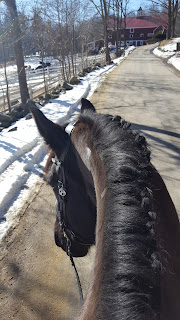 Listening to them cutting up trees in the woods

I've now reached the point where I need to braid his mane up to keep his neck from overheating.  Progress?  Sure, we'll call that progress.  Pony is too delighted to be a wild, feral, naked stallion to care too much about anything I do. 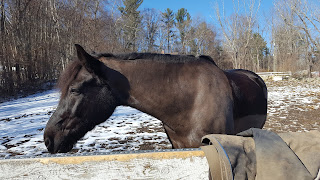 Don't let the eyes fool you, he did a full on 'happy naked dance' when his blanket came off.  Much jumping and prancing and rolling and sound effects.  He'll get to run around naked again tomorrow, then it's back to blankets and ice.  We'll enjoy the reprieve while we can.
Posted by Catie at 1:20 PM