I had my third ride on Dolce today and the good news is that he's showing some improvement.  My shoulder certainly doesn't hurt as badly today.  I was loving life with mi papi being so soft in the contact, but now I have a certain strawberry making sure that my left arm remains a problem.  Thanks, Dolce. 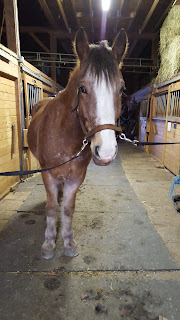 So what's Dolce's deal?  I'm still figuring that out.  He seems to be very insecure combined with being overreactive when you push him.  I push with my leg to make him move back to the rail, he ignores because he would rather twist and look for the other horse in the ring.  I bump him with my leg to get him to listen and he loses his little pony mind because I beat him.  Beat.  Him.  He tucks his tail like a frightened dog and scoots out from underneath me.  I don't like the running away so I end up with him hard up on his single joint full cheek snaffle.  Wash, rinse, repeat.

After two rides of 'so help me, pony, I will bring hell down on you if you don't stop trying to scoot out from under me any time I ask for something', I had made the appropriate impression.  I am not to be ignored and rude behavior will not make me stop whatever I'm doing.  I'm not scared of you, pony.  It's the weird combination of genuine insecurity and learned behaviors to get me to take my leg off and leave him alone.

I discovered on that second ride that, under the twisting and evasion, the pony has buttons.  He has a frame button, a stretch button, and even a leg yield button.  I was so pissed.  Here I am riding him like a total green bean when he's got training under all that rust.  So I pushed a bit more and found some nice moments.  Between the spooks and rooting and turning into a pretzel.  His contact feels like it will be fine, but his response to the leg is all wrong.  Rebuilding that response will be my goal.

Today I went in with the mind set that now I need him to see me as a positive thing in his life.  Nice long grooming session with the curry comb and ridiculous amounts of praise during his walking warmup.  We did a lot of leg yield back and forth, working on him reacting appropriately to my leg.  Move when I push, do not flip out and overreact.  Every time he crossed his legs, I verbally rewarded him and scratched his crest.  Ten minutes of this and the light bulb started to turn on.  Step over promptly without slamming into the bridle like a loon and you get loved on!  Who knew?! 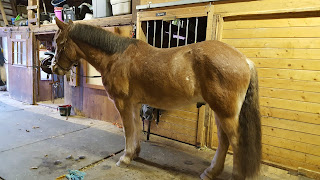 Yet another horse with a fantastic tail

It did transfer to the trot once he was settled.  I put on my inside leg and instead of him trying to bolt into the center of the ring, he would tip his nose in and step away from the pressure.  Oh hallelujah! We were able to trot around the ring with lots of turns and changes of direction without tearing up my shoulder too much.

The canter?  Oh, that thing is awful.  So awful.  The first time I tried to canter him, he ran off in the trot.  Fine, fine, reset.  Takes off in the trot.  Ugh, fine, now I absolutely have to get this done.  I gave him a bump with my heel and he freaking bolted with his tail clamped down.   She beats me!  She beats me!  The actual canter is a headlong bolt that is constantly trying to break down to a frantic trot.  He's not that weak, it seems to be lack of experience and training.  Right now I'm doing almost all of his work in walk and trot with a tiny bit of canter just to desensitize him to the idea.  One 20m circle in each direction, much loving on, call it done.  It's working, today had a few strides of actual canter in the midst of the bolting as he realized nothing terrible was happening to him. 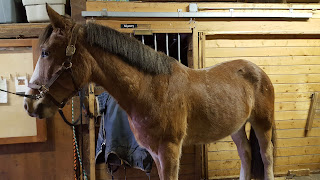 I think there's a perfectly nice pony under the current ratbag routine.  His ground manners are very good, he'll stand on the cross ties all day while I groom and fuss.  He likes the attention and comes up to the gate to see me.  I think with some routine and miles, he'll be happy to have a job.  I'm hoping that if I spend a couple weeks getting him to the point of w/t/c like a gentleman, I can hand him off to the teens and they can finish the work.  His conformation is kind of wonky but he fits Theo's jumping saddle.  It's nice to be able to ride in my own saddle.  I've got to do something about that bridle of his, it's so ugly and several keepers are broken.

I do have that size 3 High Jump bridle hanging around . . .