I've got a little issue.  My horse has no elevation. 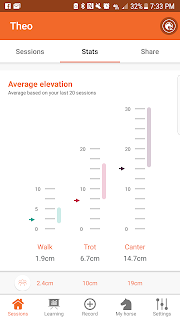 Seriously, look at those numbers.  Look at the averages for Equisense users.  Notice that he is off of the 'normal' range in two out of three gaits.

Then look at Dolce's numbers. 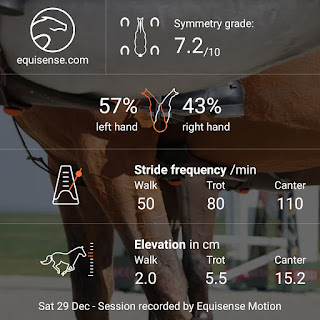 The untrained, unfit, careening around at the canter with no steering or balance pony has the same elevation!  Also note that crazy canter rhythm.  So much work to do with that pony.

I get Theo up to 16.8 cm in the canter during any given session, but that's still well below the 19cm average.  I'd probably have better numbers if I didn't let him warm up on a loose rein to start and then move my elevation up throughout the ride.  In a recent ride, he started at 14.1 cm and ended at 16.8 cm as I increased collection and activity.  That comes in with an average of 15.5 cm.  Sigh.

So should I be concerned?  I don't know.  I need elevation to get that change, but Theo just isn't built to bounce.  He's built to take his weight back, but he's not built to catch a lot of air.  I did get a successful change in each direction today so it's not a kiss of death, but there will be no comments about 'expression' or 'loft' on any of his tests.  Ever.  He gets it done, but he's a bit of a minimalist.

Jumping January will hopefully help.  I've talked to Trainer A and she's busting out the Circle of Hell with raised poles.  I'm averaging around 75 transitions per ride and that's probably the one thing that will help the most with getting his weight back and getting him less earthbound.  We can try to squeak out another centimeter or two, but I don't want to chase a number at the expense of our current calm, happy work.

None of the judges have mentioned any problems in the past year, we get straight 7s for our gaits.  I don't think this is a limiter for the low level stuff I want to do, but it's something I should at least be aware of.  I don't think of Theo as a flat mover because his back moves so much.  Now I watch videos and go 'oh yeah, he really doesn't move much vertically'.  I never noticed.
Posted by Catie at 4:06 PM