It's cold out.  Not like 'aw, I need to put on a coat'.  More like 'omg when will I feel my fingers again?!'.  Theo's 8am lesson today was cancelled because it was 14* out and we generally don't work horses when it's under 15*.  Not good for the lungs and too much risk of freezing sweat.  I scooted out to ride him this afternoon when it got up to a balmy 26* and found that he had pulled a strap of his heavyweight turn out off.  Really?  It's getting down to 10* this week!  You need that!  So guess what I'm doing tonight? 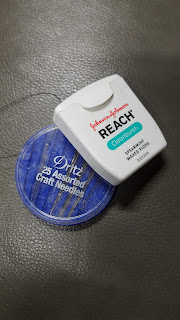 Saturday nights when you're a horse owner.  Wild and crazy.

While handling and tacking Theo I noted he was yanking his head away from me like he'd been beaten to within an inch of his life.  He was also spooking and snorting at things like his own blanket.  He didn't want ear rubs.  My horse didn't want ear rubs.  What the actual hell?  I turned to look at something and he grabbed my jacket.

Well, hello naughty Theo, it's been a long time.  All the other horses are being sassy in the bolting, snorting way that most riders have experienced.  Mi papi has his very own way to celebrate the cold.  He gets slow, distracted, and pissy like a teenager that just lost their phone.  He'll do it, but only because you're making him and he's going to do it so slowly that you'll wish you hadn't started the fight.  And he will temper tantrum if you push the matter.

I had fortunately taken my dressage tack home for a proper cleaning and conditioning.  A healthy dose of lederbalsam combined with full seat breeches is even better than a stick of Saddle-tite.  I put on my new rainbow spurs which are a bit bigger than my usual spurs, grabbed a whip, and told Theo to stop trying to bite me.  Time to manage the sass monster.

The problem with Theo's sass monster is that it's a sullen, pouty beast.  Lunging doesn't get you far.  We taught him to get it out on the lunge, but it's hell on my bad shoulder.  I got on and he made sure I knew that there were scary things in the corners.  All the corners.  Nothing bad, but he craned his head and snorted while walking slowly.  I put my leg on and got the one hoof salute.  Our little jog to let him get his sneezes out barely got his hooves off the ground.  I warmed him up at the walk for fifteen minutes with two coolers on to give him a fair shot to wake up (and get that hump out of his back) but he was not on board with letting the sass out. 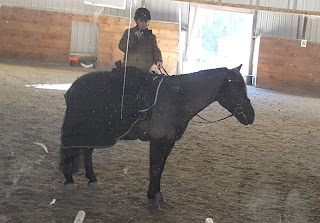 Do we look cold?  Because we were cold!  Two coolers on the sass monster

After his long walking warm up, I got rid of one cooler and we spent a solid twenty minutes putting him in front of my leg.  And back in front of my leg.  And back in front of my leg.  Pretend you don't notice that hump that's STILL sitting right behind you and keep kicking.  I even used the whip which says a lot about how our relationship has changed.  If I'd done that even a year ago, I'd be in the hospital.  I gave him a double tap, he gave me a big buck, then he started to move forward.  Wash, rinse, repeat.  It only took us 35 minutes of 'warm up' but I was able to get in a really fantastic fifteen minutes of work with lots of extra power and bounce from behind.  I love seeing those hocks and stifles working away in the mirror.  We had a whole centimeter more elevation than average in the canter once he was channeling the sass into his work.

For those of you following along at home, his 'big' canter is still 2 cm lower than average for Equisense users.  Sob.

He's recently learned how to stretch over his back in the canter.  It's both terrifying and wonderful.  I feed out the reins while he's cantering and he stretches out very dramatically.  His nose goes to the ground, his back lifts, and my terror spikes because this is also what he does right before he tries to launch me.  He canters around quite happily like this now, but only after he's done some serious business dressage-ing at the canter.  After his transition work, he stretches out all those hard working muscles with great pleasure.  And some serious trepidation from his rider who's trying to get off his back and let him do this very correct thing while seeing her life flash before her eyes. 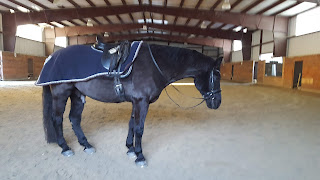 Love his PS of Sweden exercise rug, it's just enough bling to make us feel fancy while freezing

After our hour of work, Theo was back to being my cuddle monster.  He played with my hair while I was waiting for a clear shot at the door to leave the ring (beginners on ponies are terrifying).  He fell asleep loose in the aisle while I moisturized and rebraided his mane.  Keeping it slippery and braided seems to be keeping it safe from his neck rugs.  The open face sleazy isn't working out that great.  It slides back and then the elastic gets tight and I'm afraid it's going to choke him.  It also started to rub the upper part of his mane.  I cut the elastic band off and use it like a high neck shoulder guard.  He's far more comfortable this way and it's still protecting the half of his mane that's in danger.  A long mane is a ton of work, why was I thinking it would be easier than a pulled mane? 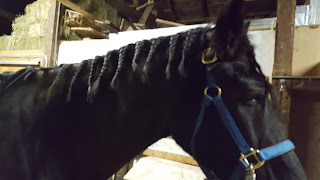 Tomorrow his other rider is working him.  Hopefully the 35* heat wave and my hard work today will keep the sass monster under wraps.  It takes a special relationship to manage him on those days.  Or a certain level of YOLO.