Believe it or not, this was not inspired by Theo winning a big ribbon.  Or me finding out that there's another, even bigger ribbon in the mail.  It was inspired by a conversation with the vet during Theo's oil change.  We started planning since, let's face it, arthritis is degenerative.  It's all about keeping him happy and comfy as long as possible.  Joint injections, Adequan, eventually some Legend but we'll hang on to that.  Vet expects we've still got many years to chase that Bronze. 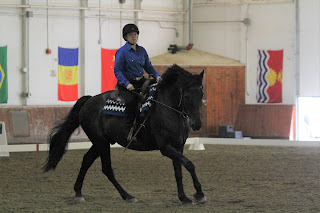 And probably some more adventures in this tack

So the current plan is a five year plan.  Start small, have plans to go further when needed.  When he's 19 or 20, he'll probably be ready to step down from competition.  And the vet asked what happens when Theo can't compete anymore.  I shrugged and said 'someone in this barn is going to be incredibly lucky and get to ride a very nice schoolmaster until he's ready to be a pasture potato'.  Because we all know Theo is a rampaging nightmare when he doesn't have a job.  He will be such a high scoring Training level school master for someone that I carefully pick out. 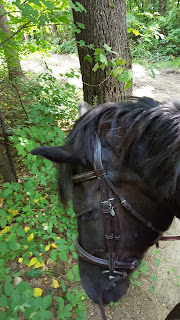 And then I blinked.  Huh.  Somehow he has become my heart horse that I could never sell.  I went into this with the belief that he might be sold.  He was Mr. Right Now more than Mr. Right.  I haaaaate riding pokey draft crosses!  I could decide I want a more competitive dressage horse, Theo could decide that he hates the show horse life, whatever.  He's also got some serious short comings.  That spin of his is legendary for a reason and his rear is not my favorite.  Or the buck.  He loses his damn mind twice a year.  He's terrible in the open and even schooling cross country at home is inviting disaster.   He's much better as a trail horse now than he was before, but he's not exactly a super star.  Casual walking is usually okay, group trotting or cantering?  Instant land porpoise.  He's not invited for hunter paces or long weekend trail getaways which I really miss.  He's so bad in a stall.  So bad.

On the other hand, he whickers when I yell for him in his field.  He doesn't always come up when he's called, but he does always call back when I call for him.  If he could climb in my pocket, he would.  He absolutely loves to be groomed and immediately falls asleep. 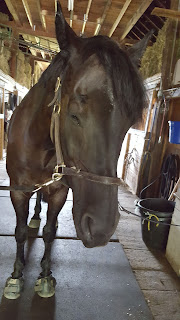 The only drugs he's on are liniment and curry comb

He loves people, he doesn't understand the concept of strangers.  He will drag me over to visit.  He loves to set his chin on my shoulder with his nose touching my cheek and just breathe.  I can mount him safely even with chainsaws cutting trees or loose horses.  I can do Second level dressage, then head outside and jump around a 2'6" course without him batting an eyelash.  In a ring or the dressage arena, he is steady steady steady.  I can toss a rank beginner on him and know they'll be safe.  He will teach anyone how to jump with a forgiving nature that no one knew he had.  He's freaking gorgeous.  The highlight of any day is getting that horse out of his field.  I'm always proud to walk next to him.

Somewhere along the way I quit calling him papi or jackass.  When I call for him, I call him Gorgeous.  Hey Gorgeous, get your chubby ass up here! 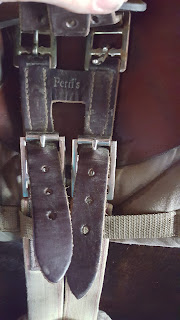 This is what happens when your horse misses work due to lost shoe/hock injections/pink eye epidemic, you get out the girth extender

He lets other horses pass him in the aisle now.  When a beginner careens into me while I'm riding, it's a sigh, not an emergency.  We go for long walks in the woods together and it's no big deal. 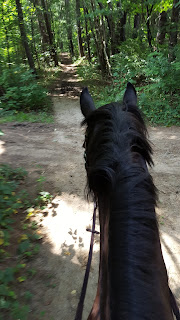 Bugs are gone, time for all of the trail strolls

Allen, my first horse, needed a safe place to land.  He needed somewhere to retire and traded me some wonderful years of learning in exchange for his field full of TB mares.  Fiona needed a teacher to give her the skills that would land her a job.  She got that, then moved on.  Theo needed a partner.  Someone that considers getting him out of the field the highlight of their day.

So dear ol' Theo is stuck with me.