Cure to what ails you

After Theo's oil change, I've been very cautious to come to conclusions.  I'm just so damn hopeful that this is the fix for our canter woes that I don't want to inflate any differences that I feel.

That first ride, though, I saw several inches more over track at the walk.  Trainer A saw more hock activity in the canter and he was far more willing to canter on that left lead.  He suddenly had a counter canter and a 10m circle on the left.  Perfect?  No, but a noticeable difference.  About ten minutes into my ride I had to conclude that while he was working better left, there was something wrong.  After comparing notes with Trainer A, we concluded that my beloved jackass had a sore ass after being a complete idiot on the lunge line with her the day before and suddenly having more reach.  We kept it light, easy, and positive.

A week of consistent work later and I'm very confident that he's comfortable, but he wasn't symmetrical when I brought him out.  Slightly short on the left.  I felt no hesitation, but he was uneven.  Trainer A and I talked, we studied, and we decided that we would try to push him to square since he's been travelling slightly uneven for months.  I was in jumping tack so the answer was obvious.  If you want Theo to happily push off from behind and offer some impulsion?  Time to jumpa da jumps. 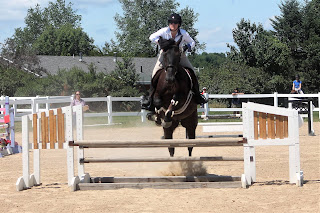 His favorite thing to do

A couple of warm up jumps, then the fences went to 2'7" and we started the course work.  Four stride to a two stride, bending lines, skinny jump, all the fun.  It took Theo a course to figure out that we were doing his favorite thing for real.  He smacked the first jump pretty hard when he didn't realize they had moved up to an actual jumping height.  After his first course, I felt him hit the bridle for the first time in a long time.  Pony switched on and I could get up off his back and enjoy the power we've been developing.  He suddenly wanted to devour the fences.  Six strides to the skinny on the first pass, five strides on the second.  With his confidence to the fences, I focused on the big release he loves so he could fully use his neck.  I had to take a check heading into the two stride since pony now knows he's strong enough to take it as a one stride.  Not something I want him to start doing.

Trainer A was so delighted to see him power up like that.  So was I.  Right lead, left lead, didn't matter.  He was right there and ready to jump with his knees to his eyeballs.  Threw in the occasional flying change.  I would pick up a contact to start a course and he was immediately offering the canter.  No kicking needed for the jumping pony.  After jumping a couple courses and practicing a correct, balanced roll back to the left, I trotted him off.  Totally even behind and overtracking on both sides.  Even at the walk he'd become symmetrical. 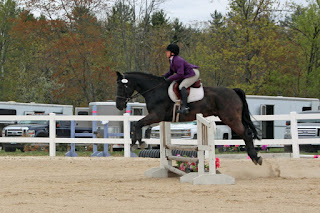 It's been too long since we jumped for real.  We jump little jumps very regularly, but I usually jump whatever is in the ring.  With all of the younger riders, it's usually cross rails or 2' verticals.  Our lessons were focused on show prep for the dressage pony.  This was our reminder that Theo needs real jumping lessons to unlock the forward.  He genuinely loves to do it and it inspires him to go forward without me having to push or beg.

As for the oil change?  We cantered for five minutes to the left with only one correction for attempting to break.  That left lead canter issues appears to have been addressed.  He's confident and willing to the left now.  Does he need the stifles done?  Still undetermined.  I'm going to keep working him and focus on keeping him even behind.  He's been uneven long enough that I'm sure he's got some asymmetrical development and bad habits.  Once I feel like he's had some time working evenly, we can trot him off and see if he needs a second round of injections.

I single hock injection seems to simple a solution, but maybe?  Maybe?
Posted by Catie at 5:31 PM