2018 was such a weird season.  I wasn't even going to have one, and then it was suddenly a parade of shows all back to back.  And then boom, done.  Five weeks, four rated shows, and now my calendar is completely clear again.  It's like that moment when you walk out of a loud bar.  You didn't really notice how loud it was until you walked outside and all of a sudden the silence is so weird. 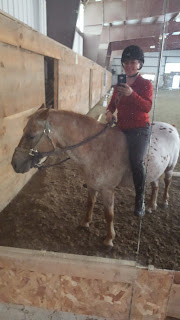 I suppose I could work with my new FEI prospect . . .

I don't even have clinics scheduled right now.  There's some schooling shows going on in the area, but they all seem to fall on the same weekends as my two half marathons I signed up for. 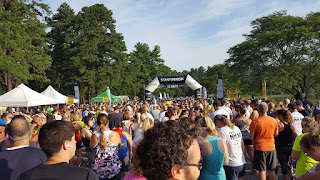 Still doing this whackiness on my free weekends

Yeah, two.  I'm on crack or something, I swear.  Or maybe it was the margarita I was drinking post race when one of my running friends convinced me to sign up.  Sure, I did a 10 mile race recently, but that doesn't sound as scary as a half marathon.  Half marathons are for real athletes, not crazy middle aged women that just want to be able to breathe while keeping their rather lazy draft crosses going forward. 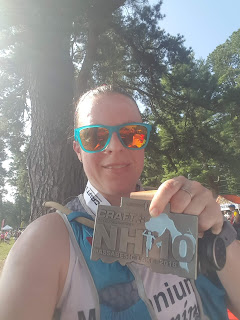 Do I look miserable?  Because I was so miserable. #whatthehill

But I'm signed up and I'm not big on skipping things that I've paid for, so those are going to happen.  Which means I have no schooling shows closer than two hours away.  I don't really want to drive two hours for a schooling show, especially when I have no idea how the judging will go.  If it was for a rated judge, pony would go on the truck so fast it would make his head spin.  But a lot of these shows are TBA or an L judge listed.  That's a lot of hours of travel for an unknown L judge, especially when I can have one come to me.

I called up a friend of mine that just happens to have her L to bribe her into coming out and playing judge for an hour while I run through my Second level tests.  She's successfully competed at Grand Prix and has even ridden Theo once (recent Theo, not dark past Theo), so she's well suited to help me set my goals for the winter.  She knows where we're going, knows Theo's limitations, and knows what a judge will be looking for at the start of Second.  She also doesn't watch us work pretty much ever, so she's a fresh pair of eyes.  I can probably drag a couple other riders into the ring as well and turn it into a useful morning.

She's also offered to help me choreograph my freestyle this winter, so that will be fun.  I think.

I'm trying to scope out a jumping clinic as well.  It's not a primary focus, but that's no excuse for totally slacking off and letting those hard earned skills disappear.  I didn't spend thirty years falling on my head while developing an eye just to forget how to ride a distance.  I'd love to get Brad Giuda out again and take a private.  I think I'd get a lot out of a tune up with him.  Vitor Silva is probably going to be out at Gelinas soon, so I'm on the watch for that clinic.

I put on a coat today for my commute to the office, so fall is definitely on my mind and the impending winter.  We'll need a plan and some goals if I'm going to make it through the long, dark hours trapped in the indoor.