After the excitement of our show, it was jarring to have the vet out to visit.  He just had an amazing outing, why does he need a lameness exam?  Because I shouldn't need to throw the kitchen sink at him to complete our canter work. 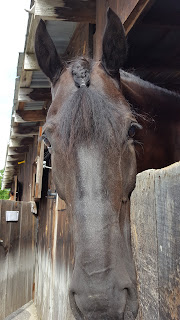 So I went out to the barn on Friday.  I had the day off from work so I went with lots of time to kill and gave Theo a massive grooming session.  He was in heaven while I spent an hour with the curry comb and tail brush.  By the time the vet showed up, he was sound asleep.

My current vet is not in any way a sport horse vet.  His clientele is almost completely pleasure horses and lesson programs.  He has some horses that compete at shows, but it's low level stuff.  When a horse is looking off and he suggests an expensive solution, he's usually shot down.  He is very aware of the price tag on things.  He's also been doing this a long time.  When he showed up, I was all prepped for blocking, images, trotting off, hours worth of examination and injections.  I've done this sort of thing with sport horse specialists and its a very expensive ordeal.

Instead he showed up with an x-ray machine, took four images of each hock, and went back to his truck to develop and compare.  He brought his laptop back up along with the supplies for joint injections.  He took me on a quick tour of Theo's hocks.  We've got remodeling on both sides, the start of fusing in some spots and some rough surfaces but nothing unexpected in a 14 year old.  No lesions, no weirdness, just remodeling.  Rather than going through a lot of fussing, he suggested we just inject his hocks to manage what we're seeing and come back for the stifles in three weeks after we see how he goes with his hocks done.  Clearly the hocks need some love before he does a lot of collection work, so let's just do it and see how he feels.

I wasn't ready for quick and simple.  I was ready for blocking and trotting and agonizing.  Instead it was 'we thought he had arthritis, I see arthritis, we treat the arthritis'.  And he wants to do the stifles separate because then we know which injection has the most impact for our future treatments.  Stifles are hard to x ray and Theo has rather large thighs.  The vet estimates we'd see about 60% of the joint which means a clean x ray can mean absolutely nothing.  If the hock injections aren't enough, he'll come back and do the stifles.  No big deal and no more x rays needed.

Pony took a little nap and the vet did his hocks, quick and easy. 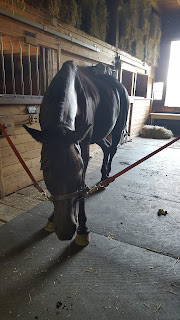 Theo is a total lightweight, btw.  He got 0.9 mL of tranq when the recommendation for his weight is 1.2.  I had to hold his head and Trainer A took his tail when it was time to move him to a stall to sober up.  He didn't move a muscle for the injections and the synovial fluid was in very good condition when he was injected.  He was moved into a stall and stayed there for three days.  I'm going to get an itemized list of what he destroyed so I can just replace it all. 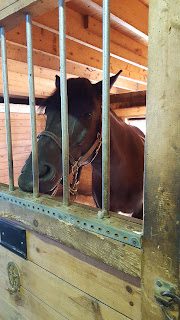 
And lets all keep in mind, Theo is not at all lame.  He's maybe a 1 on the lameness scale on a bad day, meaning most of the time you can't see it or feel anything.  This is strictly proactive to ensure he's completely comfortable before harder work.  Which my vet had to remind me of several times.  A Enter Spooking recently wrote about how she hovered over her vet and kept asking if there was anything that should be done during an exam of her horse.  I was just as bad if not worse.  My vet had to shoo me away from the x rays at one point.  If I could liquidate my paycheck and shoot it into his joints, I would.  I asked if the vet wanted to inject the hocks, stifles and SI all at once just to be safe.  He stared at me like I'd grown another head.

I don't think his other clients are like me.

Tonight he comes out of his three days of stall rest and handwalking.  Thank goodness!  Then it's back to work to see what difference this made.  In three weeks we'll decide if the stifles also need to be done.  I'm expecting it will be a yes, but we'll see.  I'm okay with taking it slow, he's done for 2018.  We can take our time and make sure that he's completely comfortable.

And the best news?  $550 was my bill.  I used to pay $350 per hock, more if the ultrasound machine came out or we needed new x rays.  I could get used to this more frugal approach.
Posted by Catie at 5:23 PM