Trainer A is a smart lady.  I figured there wasn't anything I could really do to get ready for the three phase this weekend, but she had other ideas.  When I showed up for my lesson today, she announced that I could warm up in the indoor and then we were going out to the Ritz.  As a reminder, the Ritz is the big field where we jump stuff. 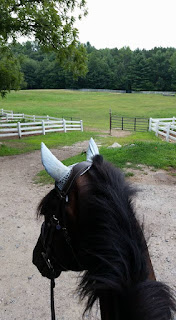 Pulse immediately jumps.  What can I say, I'm still coming around to the idea of jumping out in the open after my time with the Meathead.  Mi papi has such a reputation for being a puke out in the open it's hard to forget that part and just ride the horse that I've actually experienced.  I warmed up in the indoor then bravely marched out to face my fate.

You know it's going to be interesting when Trainer A announces that I was going to trot around the field once in each direction, then she had some fun ideas for torture.  Really, trainer?  Really?!

So after jumping two logs, I learned my course.  Keep in mind, I haven't actually jumped a cross country course in years.  I even told her that I was nervous about cantering down to these fences.  She said I'd be fine.

We went downhill over the log line, turned and went uphill over the log pile, two strides to the hanging log (Beginner Novice question with a small drop on the other side), turn hard to another hanging log and uphill to a birch (each about 2'), then turn and canter right out of the field and into the next field over, twenty meter turn, canter back in to a 90 degree blind turn to a one stride combination (neither of us have jumped it before), turn and canter back out of the field and down the trail to a turn around point, come back, jump the skinny, then pass out.

So help me, we did it.  We did it despite my nerves, despite my stirrups not having enough holes to get as short as Trainer A wanted, and despite the fact that the horses in the surrounding paddocks were getting their dinners.  He was sticky to start, more occupied with the feed buckets being passed out.  I did the first two logs which were quite small and friendly, then turned to the two stride.  I felt him suck back and look at the girl with the feed buckets.  I heard Trainer A yell 'push that horse!'.  I decided I was not going to die today, damn it all.  I growled like an angry German dragon and booted him hard.  He gave me one buck then jumped the combination beautifully.  I felt that pommel whack against my sternum as he launched over the second part with his knees up around his eyeballs.  On the other side, I gave him a big pat, cooed at him, and he let out a big snort.  It says a lot about our relationship that he just took that big of a correction then moved on without getting angry.  He shook off the correction and moved on with a nice sense of forward.  The rest of our course was lovely, he was a total packer.  He never considered stopping and cantered bravely out of the field, even if he had that big question mark over his head and sent another field of horses scattering.

When we were done, Trainer A was waiting for him with half of an apple.  I guess she's made peace with my treat based training.  Theo even gave me a bit of a swagger while walking out afterward.  Trainer A's favorite parts were his brave approach to the fences he'd never jumped and the way he took the correction.  She also appreciated the fact I started to sit up and remember how to be an eventer.  There were glimpses.  Not much, but glimpses that I had, once upon a time, galloped about fearlessly. 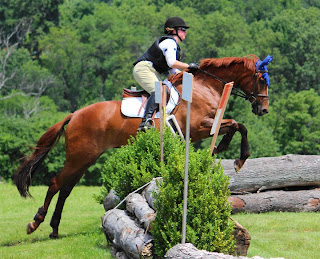 Once upon a time, with the princess, when I was an eventer

It was the confidence boost we both needed.  I'm only doing 18" jumps, so it's not about big jumps or tricky combinations.  It's about Theo going out bravely and taking my word on it that we're going to be fine.  We have a battle plan, I've been assigned a groom, and now I've got a course under my belt that is far bigger than anything we'll be facing.  I'm working on putting Theo's and my pasts behind us.  Theo is a different horse than he was a year ago when he refused to complete his cross country and jumped out of a dressage ring rather than finish his test.  He's also not the Meathead who threw a temper tantrum when I tried to take some control and threatened to unload me.  This isn't me facing down a Training level course.  This is me going for a calm trot/canter in the woods with some logs to hop over.

I guess I better dig out that old cross country vest and armband.