aka My continuing attempts at figuring out collection with a horse that did not read any of the training books.  Any.  At all.  NONE. 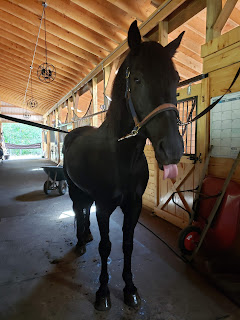 It's been pretty dang amazing picking up my riding again with Theo playing the role of school master.  He's being ridden at a high standard most days of the week and it shows in his body and his expectations.  Trainer Z isn't going to put up with a lot of non-responses so he's gotten much lighter.  He's also gotten strong enough that doing the job isn't a big problem in his mind.  Trainer Z also rides him straight which means he's balanced enough to make up for my little (massive) physical issues.  When I get on him, I have a very level base underneath me which pushes me to ride in balance.  My shoulders aren't truly square since that's not physically possible but the weight is even and I'm not lurching off to one side or the other.  Kiki will benefit from this one day.

I'm very, very lucky to have this opportunity.  Theo's got a clean change in both directions now and by the time I'm given the green light to start playing with them, they're going to be pretty much confirmed.  I got to skip most of the struggles over the past six months while Trainer Z got those cleaned up and fully installed.  Theo knows me and we have our own, unique little relationship that results in us having fun even when we're screwing things up.  Might have crashed through some caveletti yesterday but it's still fun.  Just a little relapse into jumping reflexes at the exact wrong time.

Down side?  Theo is the freaking weirdest horse to ride in collection.  Trainer Z struggled with this as well until she was in a clinic and they stumbled on the fact that he doesn't feel like other horses.  He doesn't feel 'forward' in collection.  Trying to get him to feel 'forward' pushes him off his natural rhythm and the whole dang pyramid falls apart.  His impulsion powers up more than forward.  He's super willing and upward transitions are very prompt but you never feel like he's really going somewhere.  Both of us find it very weird to ride compared to other horses and at least for me it's been hard to get comfortable.  Because you must have forward!  True, but impulsion doesn't always feel like a drag car waiting to tack off down a track.  Sometimes it feels more like sitting on a rocket ready to launch.

When he's in collection you know you have all of this power but it doesn't feel like it's going anywhere.  The wild part is that it's just a feeling, it doesn't reflect what's going on.  From the ground, it looks great and he gets 7's and even 8's for the technical scores.  His hind leg is taking the weight and he's relaxed and balanced and responsive and all that.  There's a reason his simple changes are his strongest movement.  But he's got that short back, small moving front end, and no mental interest in going anywhere in a hurry.  Apparently he knows you pay the same fee at a show regardless of how long you're in the ring and he's going to get his money's worth.  When he goes into collection, his cadence slows a notch and he does his powerful fancy prance with a very active hind leg.  He'll get there when he gets there, it's not like the judge is leaving.  Allowed to do things in his natural rhythm?  He's got some serious bounce. 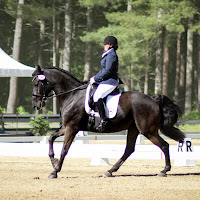 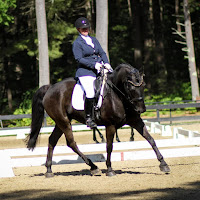 Nothing wrong with his collection for a mid-level horse, just feels totally wrong

We were practicing his half passe in trot now that I'm figuring out how to get and hold that collected trot.  First we did haunches in, shoulder in, haunches out, 10m circle, all at random so he was really on the aids and I could feel him moving into the outside rein on both sides.  Then it was half passe while worrying only about holding the rhythm.  It's so easy for him to go sideways, my job is mostly to set up the shape and then make sure his rhythm doesn't change.  Don't lock down, keep the aids moving and keep the rhythm, worry only about the rhythm and what the hind legs are doing.  I went to change bend and rebalance for the corner and he really started to bounce.  I glanced at the mirror and sort of yelped.  My 18 year old mutt looks like he's considering passage?!

Trainer Z laughed because yup, there's a passage in that collected trot.  She's been working his half steps in hand but the passage offers are all him.  He loves the mid-level work and gets excited when we're doing it.  He's an odd duck in that he heats up as the ride goes by and his most animated, fun work is at the end when other horses will be getting tired.  I'd been riding for 50 minutes when he decided he wanted to show me just how big his trot could be.  Not that it felt forward.  Added bonus, he's developing a real medium out of that collection.  Which also doesn't feel as forward as it should.

I feel better that even the professionals agree that Theo feels weird.  He will be so on the aids that you feel like you're on a ticking bomb but he doesn't feel like he's going anywhere.  He's not stuck, he's just going the way he does.  Is it mental?  Is it physical?  Probably both.  He's not really built to cover ground and he's a lazy, lazy boy.  If he was my FEI prospect we'd have a problem.  But for a Third Level school master, he's pretty darn perfect.

Until the fall crazy times get here.  Then all bets are off.