I got to visit Kiki!  It was also the day that I dropped off the last check for her purchase and started transferring all of her paperwork to me as she's being weaned.  So I'm broke.  But let's focus on the cute. 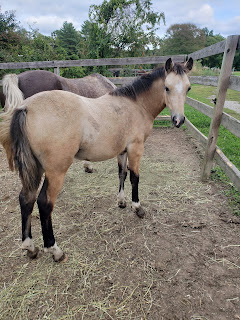 Oh dear, Kiki
Poor Kiki, she's going through her first awkward phase that I've observed.  She's always been so balanced and then I came around the corner and just burst out laughing.  Oh, honey.  That butt.  What the hell?
She's definitely in the middle of a growth spurt.  Her breeder and I agreed that we lucked out that she waited until after her inspection to pull this particular 'hide her behind the barn' phase.  Not unexpected at all, just hilarious for a filly that has hardly had a day where she didn't look perfect.  No, it's not the angle of the picture, she's just ridiculously butt high on the day I visited.  But I cuddled her and gave her all the skritches all the same because I know she'll catch up with that butt soon enough. 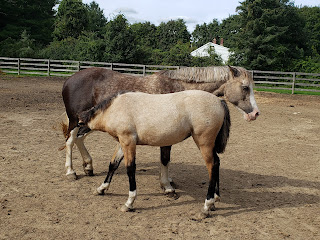 Kiki, honey, you don't fit anymore
She's still the sweet, sensitive young lady I've met before.  She absolutely loves to be touched, even on her belly or legs.  She doesn't really care so long as she's getting groomed.  She's putting on her winter coat and while the rest of the class of 2022 are showing how dark they can go, Kiki is sticking to her frosted buckskin look.  She has dark hairs mixed in but she isn't showing any signs of going super dark like the other foals.  She's hanging on to her light buckskin look and I'm delighted.
She's also a total heathen.  She has left  a lot of bite marks on the other foals.  I got to spectate while she reared and goaded the colt into galloping for her entertainment.  I didn't get pictures since I was out of range but she has the colt of the group well entertained.  They're being weaned together due to being very close in age and the other filly her age heading home to Canada today.  It's going to be a rough week for the class of 2022 with one foal leaving and two being weaned.  It had to happen but that doesn't mean it will be an easy week for a mama's girl like Kiki.  She certainly won't be alone but it won't be her favorite day. 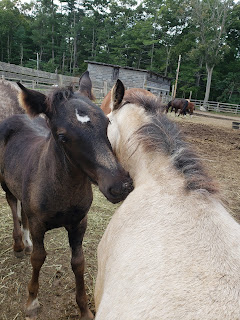 Back at home, I had an unobserved Theo ride and then he got a mini spa day.  We're going to avoid clipping him until after his last show of the season and then we're going to clip him conservatively since he's got a pro that can wait all day for him to dry if necessary.  The hope is that more hair = less tantrums.  I really don't want to risk Trainer Z.  They have a show together next weekend and then it's the off season for them.  There's a Second Level freestyle to finish and the final polish on his Third Level moves.  Trainer Z and I both have plans for next season. 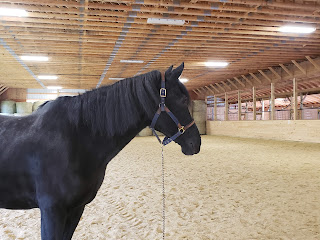 He's sexy and he knows it

2023 is coming fast and I'm going to have my hands full showing a yearling filly and my Third Level horse (YES I'M GOING FOR IT).  I will catch up on my sleep now because come May?  Sleep is for the weak.