I've heard that Foal Friday is a thing.  And I tried to participate on time but Monday is close enough on a holiday weekend.  I'm too far away to participate most weeks but the pictures from the inspection are starting to emerge and I got to visit Kiki this weekend.  So without further ado, pictures of pony foals!

All good photos credit to Spotted Vision Photography, all cell phone shots are me or Marqui's breeder.

Kiki has to go first, of course.  Poor thing trying to show her lovely movement in water up to her ankles due to the flash flood. 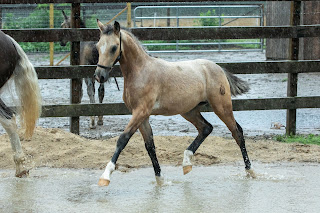 She tried hard to be a good girl but you can tell she thought this was all a bad idea.  It doesn't help that her mom was so utterly done with this whole thing.  Please note Bonnie's expression as she is plotting her revenge while trotting through the storm. 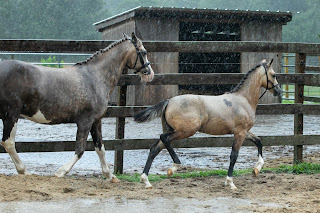 Second?  Revere, the colt that enjoyed the inspection and his captive audience so much.  He did not want to end it and come back to the barn.  Retained by the breeder for obvious (omg got an 8.3) reasons.  He's a half-uncle to Avanti and Ozzy (same dam as their sire). 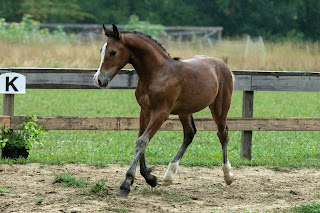 Third is Avanti, the little filly I waited for but ended up passing on.  She is such a personality, she will present you with her rump and refuse to move until she has received the skritches she wants.  She's shedding out jet black and will be stunning.  She's also growing into quite the little chunk.  She's going to be a strong, fast young lady. 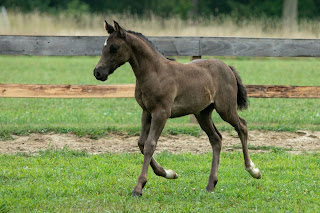 Last but not least?  Ozzy.  This is a half brother to Avanti with the same sire.  He also enjoyed his inspection greatly as he got to run amok while people coo'ed to him. 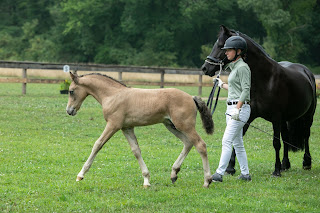 Bonus picture of Ozzy checking in with the inspector to see if there were any other instructions.  The cobs are not a shy group. 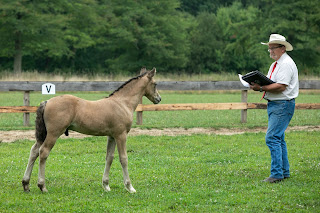 She's not really a foal but she's still a filly and there was no way I was not going to share this picture.  Half sister to Avanti with the same dam, two year old Raleigh got an audible 'ooooh' from the spectators when she started moving.  And then a scramble to make sure she didn't jump out of the ring as she was clearly considering doing.  Spicy little red head. 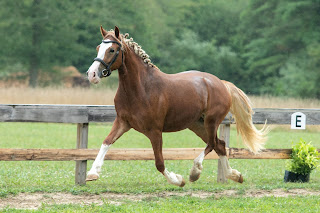 And now for the candids of me visiting the mob for no other reason than I was in the area and wanted to love on my foal.  I have never been around a foal mob before and it was a lot of fun, even if I was definitely concerned that the kids were going to knock me over while jostling for position. 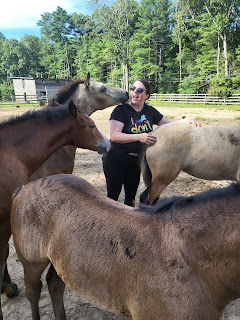 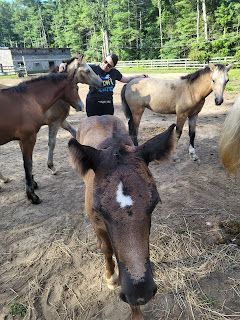 Rhya is the one giving me a kiss on the cheek, Kiki is the one wanting to know why I'm being interrupted from rump scratching duty.  The kids are starting to shed out and get ready for winter so they were even more itchy than usual.  Poor Avanti is going to shed her baby fuzz just in time for her winter fuzz. 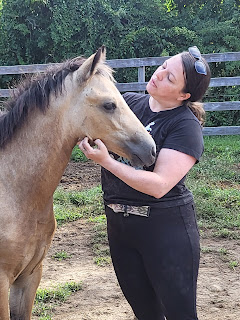 I love this picture and I'm going to look back at it a lot over the years.  Me cuddling with Kiki at 5 months old.  She's going to be quite sensitive but that's an attribute for a future dressage horse.  She loves cuddles and grooming.  Her ears never stop moving and she's very aware of everything around her.  She's going to be spicy but I think she's going to be the good kind of spicy.  You need some spice to move up the levels.

It'll probably be a couple weeks before I make it down for another visit.  She's being weaned at the end of the month, I can't believe she's already six months old!