Ugh, I do not particularly like this part of the year.  Neither does Theo. 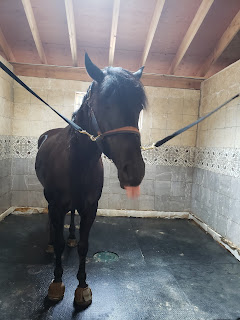 It's been 95* and humid as hell for about two weeks now.  I spent part of that pedaling my bike all the way across Iowa because I apparently like to do dumb, difficult things.  Ever heard of RAGBRAI?  That's what I did for the last week of July.  Theo worked hard for Trainer Z while I ate pie, drank beer, and generally questioned my sanity for 480 miles. 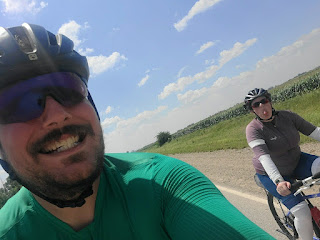 Me and my brother acting like complete fools somewhere in Iowa

I came back more fit and with some very weird tan lines.  The heat, however, has kept me from capitalizing on my improved strength.  There's only so much I can do when the larger half of the partnership has decided that it's too hot for this nonsense.  To be fair, he is quite large and muscley and solid black.  We did do simple changes on a serpentine because he thought ignoring my directions on lead choice was a valid option but other than that, nothing too challenging.  His Second Level choreography is due in a couple weeks but for now we're mostly chilling and waiting for the heat to break.  Supposed to happen on Tuesday. 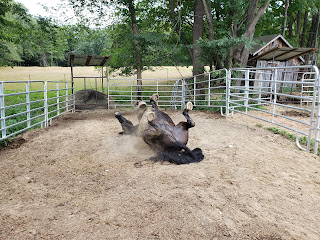 Next weekend Theo is off to play school master for someone else.  One of the teens qualified for the Youth Dressage Festival but then her pony went lame.  Trainer Z asked if Theo was available to pack around for some First Level tests and I said sure.  So he's off to Saugerties to (hopefully) help a 14 year old have a fun weekend.  He didn't mind the showgrounds when we went there for the regional championships and that was many, many shows ago.  Trainer Z will be there to school him if needed but he is a pretty experienced show pony as this point.  When the teen hopped on and ran through First 2, she declared 'he knows the way'.  Yes, yes he does.  We spent a lot of time at First and he is very happy to do the easy stuff.  Lazy pony. 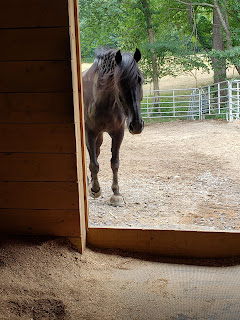 He's entered as a school master since he's an 18 year old Third Level horse packing around a teenager at First.  We're really aiming for the teen to have a good experience but it would be nice if he got her some respectable scores as well.  He may be doing a Prix Caprilli test?  I'm not actually sure but he certainly wouldn't mind a random little cross rail in his dressage.
On the 19th I'm going to be riding in my first clinic in years so that will be exciting.  Or terrifying.  I ordered new breeches that aren't tights so I can put on a belt.  I may not be a fit rider but I can at least dress the part.  Then the 23rd is Marquis's inspection and I'll be heading out to spectate and help since it's at the breeder's facility.  Trainer Z can't make it so I'll be taking video so I don't forget any comments.
August is shaping up to be very horsey and I'm very excited.  I've got saddle pads in the laundry, I dropped off Theo's jewelry box so the teen can pick out browbands for her festival, and new clothes on the way for me.  All of this horse activity is starting to feel kind of normal again and I love it.