Things don't always turn out the way you expected.  I went to my foal meet and greet with my heart set on one filly and walked away with another filly clearly imprinted on my mind as the next partner for me. 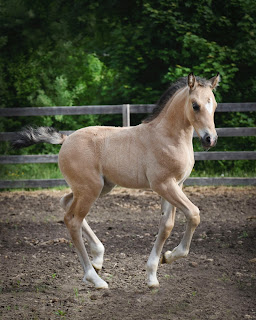 She had my attention from the very first pictures of her standing outside with her dam. 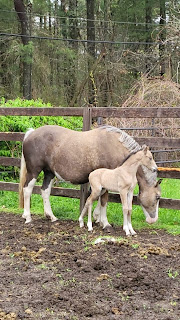 She's about 12 hours old in that picture but it definitely made me stop scrolling.  And she just kept showing up in pictures looking like a million bucks.  I was already waiting for a different foal from the same breeder but the breeder had a hunch and held on to her for me.  I went to see her yesterday and . . . 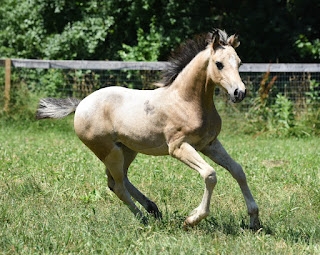 She is now four months old and loves to sit on her butt.  Three nice gaits, super pretty head, playful and very smart personality.  As the breeder said, 'competition mare mind'.  She definitely wasn't happy when people weren't watching her though she's going through a 'can't catch me' phase.  She oozes sport pony potential.  She leads and picks up her feet like a lady and her baby clip was done with her loose in her stall while she watched with a curious expression.  She's quite certain she's a princess already and her dam has the long suffering face of someone ready for weaning as her filly rears up and whacks her with her front feet. 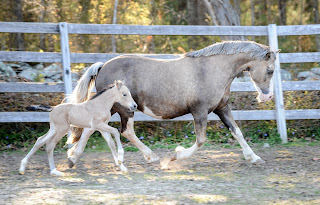 Believe it or not, her dam is 20 years old.  She's Stonecroft Gold Medallion and her sire is Stonecroft Bold as Brass. She has performance points in western pleasure from her youth but these days she just makes beautiful babies.  She likes to test people to see if you mean it (she is definitely a cob) but also loves to snuggle and get skritches. 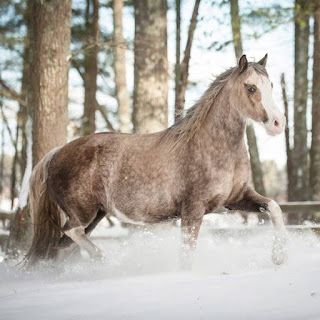 The sire is Taraco Mourinho, an imported stallion with good results in the dressage ring and approved Westfalen pony book.  This means Marqui is eligible for German Riding Pony as well as the NEDA Breeders Futurity.  Word has it that he's doing PSG work now.  He had the top Westfalen foal in 2021 for NA out of a WB mare.  I believe this is his first purebred Welsh Cob foal.  I didn't get to meet him since he lives in FL but his owner is also his rider and she loves him.  His nickname is NP for Naughty Pony so we are getting plenty of sass. 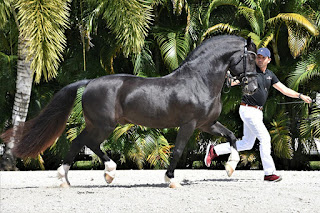 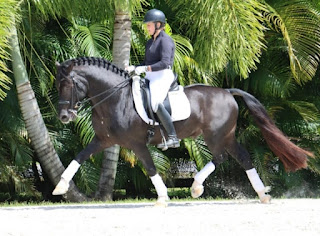 His inspection notes include always going uphill and cooperative in all gaits.  Plenty of videos with him taking his mom for trail rides and some pictures of him playing in the ocean from when he lived in Maine.  Like the many cobs we met while touring the breeder's facility, he seems a good guy that has a sense of humor with many strong opinions.  And fantastic feet.  OMG the feet on these cobs, every single one had great feet.  So good.

Marqui's Westfalen inspection is August 23rd so that will be interesting.  I'll probably take that day off from work to go spectate.  Fingers crossed the judges like her as much as me and Trainer Z.  From there it's just a matter of waiting and letting her grow up.  I'm very excited and more than a bit intimidated by taking on this project.  I'll have Trainer Z and the breeder along for the ride but it's still quite an adventure.

Welcome to the family, Marqui.  You'll have big horse shoes to fill but I think you've got it covered. 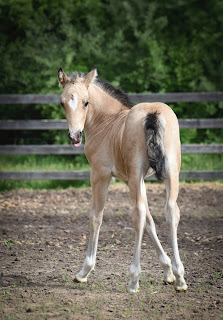