Nothing makes me more proud then when my horses go out and help other people have wonderful weekends.  Allen was borrowed last minute by a teenager to go to the New England Equitation finals.  Fiona took a teen around a horse trial short notice and ended up working with her for the rest of the season and helping her get confident at novice.  I was worried Theo would never get to be that horse since he had such a bad reputation.  And has been known to clear the warm up ring at shows.  And did his dance of the land porpoise extensively during the winter.  But time changes things and let's face it, Theo does know the drill when it comes to shows. 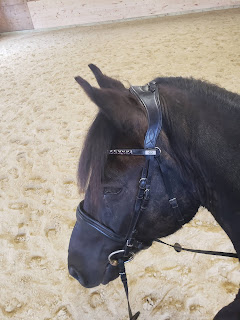 Pony gets his cookies, I get my simple changes
Last weekend Theo stepped in for a pony that went lame and took a teen to her first Youth Dressage Festival at Saugerties.  He's been so good lately and Trainer Z has been working with him for a year so I felt confident that if she thought it would work, it would work.  Sure, there was a decent chance he'd be a dork because he's Theo but the teen's usual pony is a bit of a heathen so she's used to it.  I gave her free choice of Theo's browbands and left everything else in Trainer Z's hands.  She apparently changed her browband for every ride and chose my most blinged out colors, I was so proud to spread my corrupting influence.  Poor Trainer Z. 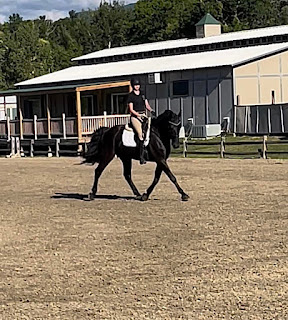 Just look at that bling.  And that very nice trot.
Traveling with a group has really changed Theo's attitude about away shows.  Trainer Z gives him the end stall when possible because then he only has activity on one side.  On the other side he has horses he got to know on the four hour trailer ride or that live with him.  They're all on the same schedule and being managed by the same people.  This appears to have been the missing piece for him to cope.  He doesn't have strangers on both sides and horses coming and going at all times.  He still needs lots of walks but he hasn't needed lunging like he did before.  His teenager was so enamored that he got tons of walks, grooming, and peppermints.  Working with a team also means there are always hands to take him places and keep him happy. 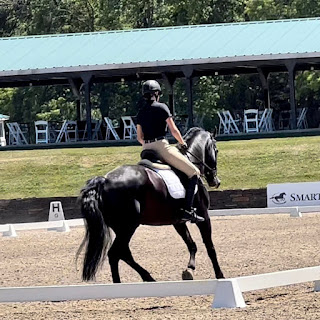 She looks so damn good on him but I have to put my stirrups up TEN HOLES after she rides, it's embarrassing
Theo returned her adoration with lots of solid tests at Training and First.  He did have some oopsies such as demonstrating his lovely canter to walk in a Training level test (no extra credit for increased difficulty, Theo, though it was very nice) but when it counted, he laid down some amazing trips. 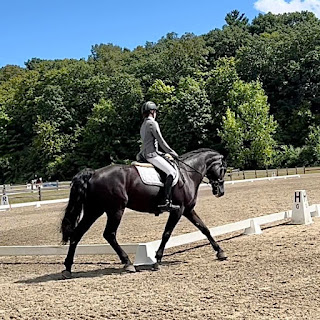 Show pony mode activate!
Trainer Z messaged me all capslock after his tests because she couldn't believe it.  Bronze medal in the Training Level division with a 74% and 5th overall in First Level division.  His teen won her equitation test.  He got his very first 9 ever (and it was for his canter, shocker of the week).  With the help of his great scores, Trainer Z's team went reserve champion team for the division.  Lots of ribbons, lots of smiles, lots of great moments for a teen just getting started in her show career. 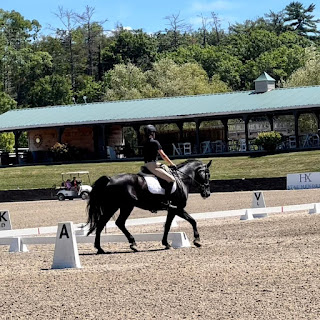 Yes, he's sticking his tongue out for this picture as usual
It appears Theo is seriously considering a career as a school master after all.  I'm quite excited.  Friday he has to cart me through my first clinic in years and be my Second Level school master.  I'll need a new bag of peppermints if I don't want to lose him to the teen that is now quite smitten with him.
Posted by Catie at 9:59 AM