It's really weird being the one coming back from injury.  Usually it's the equine that's coming back from time off.  This time it's me taking baby steps because I'm not 100% sure how my body is going to respond.  Theo is totally fine and ready to work.  His mom?  Not so much.  I was limping a bit after a 5k on Sunday where I over did it and my upper back was all tight and unhappy.  I did not want to be dragged around by a bucking bronco but the vet wants him getting consistent movement to help with the circulation in his sheath.  Sigh.  Vet's orders, Theo, you've got to move that body.
I'm starting to get back into my routine.  After work, I buzzed out to the barn.  I spent some quality time getting his mane and tail back in order.  His mane needed to be up in braids before he did any work to prevent overheating and his tail was actually touching the ground.  Not ideal for ground work where he'll back up repeatedly.  His tail was a tangled mess but with enough Eco-licious and patience I got the whole thing brushed out and trimmed to a respectable sport horse length.  He got dressed up in a surcingle, full boots, and a snaffle headstall.
I noticed a shift as soon as I put his bridle on.  He was fussing at his bit and being a bit impatient where he'd been almost asleep before.  I took him to the arena and walked him in hand while some other riders were finishing up.  It gave me time to make sure his brakes were fully installed and his attention was on me.  At first he was being pushy and impatient but as nothing interesting happened, he settled in.  I popped him on the lunge to verify the verbal commands were still in place.  We had a very boring ten minutes of trotting with some canter mixed in. 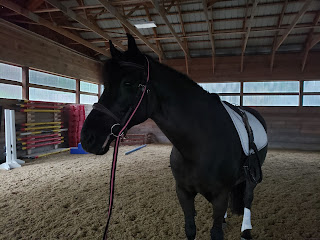 Super clever dressage pony is proud of himself for 10 minutes of work and only tripping once
He looked good in his body.  With a bit of coaxing he dropped his head for a good stretch over his topline while trotting.  Next time I'll pop on the Vienna reins to see if we can get him really working over that back.  I was pleasantly surprised to see him tracking up at the walk and picking up his hinds in the trot.  He's definitely got some extra energy in the tank right now.  I didn't get to see his right side since that's the side he bolts on and I wanted to end with a calm, positive experience to build on.  For both of us.
Overall we worked for about 40 minutes with manners and getting him settled into working mode.  I know the land porpoise is lurking under the surface and I had his side reins on to keep him from being able to really get creative if he decided to bolt.  Just a little head shake and some tail flicks this time.  I was grateful.  He got cookies for being such a good boy and following all of my commands promptly, then he went into the wash stall to have his still rather swollen junk cold hosed.  He did not like that much. 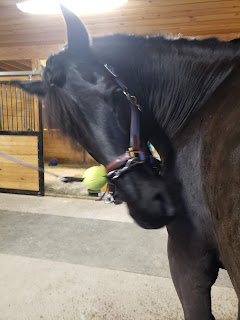 RUDE!
This was his expression and pose for most of that 20 minutes while he tried to figure out why I was hitting him in such a rude spot with cold water.  Poor baby.  It did look much better after 40 minutes of power walking/trotting and some cold hosing.  He's also getting 1g of bute a day to help things along.  The barn owner is hosing him for me today so I can get caught up on work from the past two days.
Theo seems delighted with all of the attention, even the cold water bits.  He's the new horse in the barn so everyone wants to stop and say hi, give him a pet, and coo over how pretty he is.  He has almost immediately gone back to his habit of reaching out to touch anyone that passes within range of him.  Just to make sure they know he's there and available for ear scritches.  All reports are that he is being a complete gentleman in his paddock and when he's brought in for things like vet checks.  It's like he never left.
I'm going to try to coordinate so that he can have someone on him by this weekend.  He's in decent shape and if I can get the bucks out of him, he should be ready for an advanced rider to figure out just what we're dealing with.  But how do you ask a friend to get on a horse that is 90% likely to rip some big bucks and bolt?  Hm.  I may need to get some bribery supplies.
Posted by Catie at 8:11 AM