It's been a month since I got word that my horse's behavior had gotten so bad that he was considered a liability and had to leave.  He couldn't be used for the lesson program because he was bucking kids off and bucking with the trainer.  Today, my brave friend swung into the saddle to check out what is going on.  We set her up for success with days of consistent lunging work and starting out today with 10 minutes on the lunge line.  My friend saw him trotting around on the lunge like a lead line pony and got on with zero concerns. 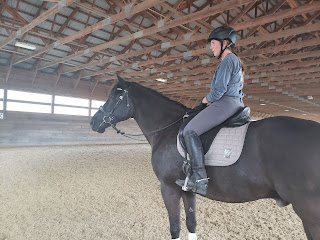 Somebody thinks they're fancy

Turns out she was right.  Theo didn't put a foot wrong.  He tested her, of course.  He wanted to see if she was serious about him traveling with his haunches in the same zip code as his shoulders.  Once he was done testing, I swear that pony was genuinely happy to get back to work.  He licked his lips, arched his neck, and worked his overweight booty off.  He's barely First Level fit but he at least offered the behaviors and looked very pleased with himself.

This was him at the end of his work out when I finally took a breath and realized he wasn't going to spontaneously transform into some sort of demon.  As my friend reminded me, I let her borrow Theo when she was recovering from surgery because he was so safe.  He's getting daily attention and spending 24/7 outside.  Apparently that's all he needed.

We've got a lot of work to do.  He's weak over his topline and in his hind end.  Not a surprise.  His old stifle stumble is back so we know where to start.  Transitions and pole work for days.  He looks surprisingly sound considering he's been off all of his supplements and shod wrong behind.  Give him a couple weeks of consistent, quality work on nice footing with his good shoes and I think his hind end will look much better.

I found out Trainer Z is going to be visiting a lot this summer since there's a lady that needs a lot of help with her horse.  Score!  We'll see what I can arrange.  My friend may ride him, I may ask Trainer Z to ride him, maybe I'll even take a lesson.  After all, I did get on him today. 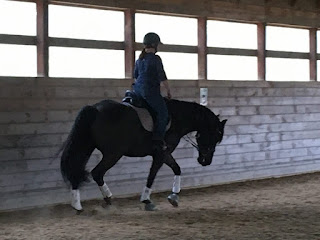 Once he'd been worked for about 40 minutes, I put on my helmet and got on for a couple minutes.  He's always been good about taking care of me when I'm not at my best and today was no exception.  He trotted around like an old school pony while I tried out posting.  It felt fine so next time I may actually put on my breeches and ride for more than two minutes.  Baby steps.
I don't know where this is going to go but I did dig out my riding clothes that I'd bagged with the intent of giving them away.  After observing Theo's ride today, I've actually got several volunteers that want to help keep him in 6 days a week work.  If he's going to be getting six rides a week from experienced dressage riders, Good Theo may be here to stay and Good Theo?  That's a horse I can ride even with my diagnosis.
Fingers crossed but my summer is starting to look a lot more horse-centered.
Posted by Catie at 4:37 PM