I love my farrier.  When I saw that Theo didn't have back shoes, I shot him a text and begged him to squeeze Theo in.  Today Theo got his new dancing shoes.  When I asked why he didn't get hind shoes before, Trainer D asked the old farrier and was told Theo didn't have hind shoes when he arrived.

I just . . . yeah, I'm going to go sit down now.  Both of them swear Theo showed up with no hinds.  Which is crazy since Theo burns through hinds faster than fronts so he has to wear hind shoes.  Which also means he's probably been in fronts only since August 2020.  Great.  I'm sure that's been fantastic for his hind end.

My farrier also found marks from him blowing out an abscess on his left hind, probably over the winter.  Which no one seems to recall seeing.  He was last shod around Feb 10.  Yeah, you read that right.  Look at those underrun heels.  I'm over here rubbing my temples and trying to figure out why people seem to think I'm an overreactive owner when my horse went about 10 weeks without getting shod and 9 months with no back shoes.  And no one told me because apparently he showed up like that? 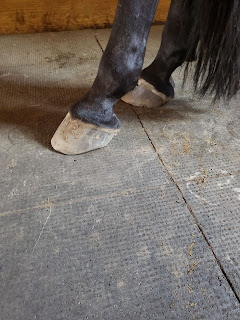 New shoes are on and the farrier should be able to get his hind feet back in balance with the next trim.  Right now his shoes are providing the support and protection so the outside wall of his hinds can catch up with the rest of his foot.  Which should make him a lot more comfortable behind.  I can't imagine what his hips have felt like.  I know how I feel when I don't have the right shoes for running, I'd probably buck too.  And that's without an abscess.  He's cleared to go back to work but everyone is keeping an eye on him because changing angles on the back end may make him more sore before he feels better.  The abscess appears to be done and doesn't need anything done to it, just a mark on his hoof to show where it blew out.

I slathered his junk with his special ointment, I'll spare everyone pictures.  The swelling is already starting to go down.  Everyone swears it wasn't swollen when they last saw him so it somehow magically blew up just before I picked him up.  Since he was kept in that day it's possible (apparently there was an emergency that day and no horses went out?).  He's being good about getting his swollen bits cleaned and treated so at least it's not a circus dealing with it.

I did my shopping and got him a new halter, new brushes, new boots, new fly mask, and a new fly sheet.  With giraffes on it.  It made my day better. 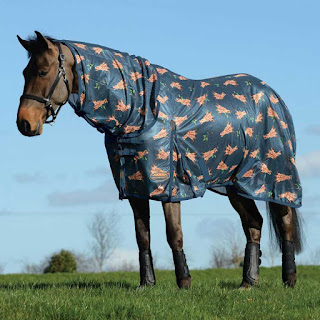 If you're not embarrassing your horse, are you moming them enough?

I didn't get to lunge him today as planned since I burned all of my horse time getting him sorted out.  I had to miss a half day at work to meet with the farrier and get his new fly gear and slather yellow goo on his junk after giving it a quick wash.  Lunging will have to start tomorrow.  He seems quite happy in his paddock so at least he's getting some time to relax and just be a horse.  We'll see how the lunging goes after his couple of chill days.  I'm hoping for lazy.  Really, really hoping for lazy.