There are days where you wonder why you own horses.

After four days off due to the pink eye epidemic (which he avoided completely and has come to an end), I snuck off to the barn on Sunday to see my pony.  He doesn't do well with time off and I always get twitchy when my horse isn't coming in at least once a day for a check over.

The house across the street was having a wedding and had these four foot tall helium balloons of a bride and groom tied to their mailbox.  Theo was having NONE of it.  I was able to bribe him half way up his field, but no closer.  I did notice he was moving a bit funny up front.  Hard to tell with him spooking and carrying on, but his front right seemed short.

I finally gave up and brought him down to the lower gate of his field.  As soon as he stepped on the driveway, I could hear that we had a problem.  Ting ting ting thud.  I stopped off at the hose to wash off his feet and legs.  Sure enough, front right was gone and he was noticeably sore on it.  He also had a bleeding sore on the opposite ankle.  Really, Theo?! 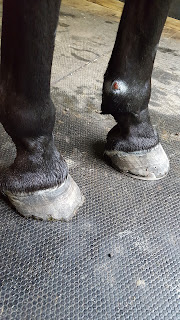 He was sore enough to stumble when I turned him on the forehand in the aisle.  He was right down on his sole with the amount of hoof he pulled off. 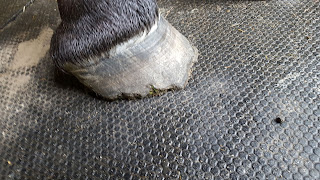 1.5 weeks before our 'big' show and he is head bobbing lame.  Of course he is!  And this is exactly how we started the abscess wars back when I started leasing him.  That took him out of the picture for a bit more than a month.  He's so touchy about his feet, I could already see myself emailing the secretary to scratch.

But a couple things have changed since the abscess wars.  Most importantly, I own the dang horse.  As soon as I saw him take an ouchie step while on rubber mats, I put him in a stall with extra bedding and hay.  No field with rocks for this pony. 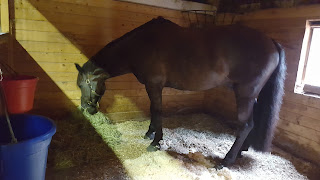 I didn't wrap or pack since there was no sign of bruising.  And with our 100% humidity as of late, no pack was going to stay on.  I texted my farrier at 4pm on Sunday and he was there 9am on Monday to fix the mess.

My farrier is some sort of sorcerer. 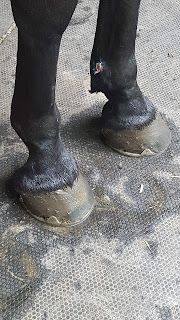 No resin or fill or anything, just careful filing and very careful placement of nails.  Theo was noticeably more comfortable as soon as his shoe was on, but he was still a bit off.  Talked to the farrier and he was confident that it was just residual soreness, not anything acute.  He was standing square by the end of the shoeing session and trotted off about 75% sound, so I sent him back out to his field so he'd quit destroying the stall.

Tuesday Trainer A lunged him since he'd had a week off and it's the time of year when he starts to become a problem.  He was about 85% sound, comfortable to work in the indoor but slightly guarding the right front.

Last night I went out to visit.  I trotted him off on the black top and could hear a slight difference in the right front but he was happy to move out and threatening to drag me down the road.  I threw his western gear on and worked him in the indoor for about 25 minutes.  He was totally sound on the arena footing, so I'm calling him 95% sound.  You can pick it up when he's on the road, but very happy to work on soft footing.  Worked without spurs and still had some nice reach. 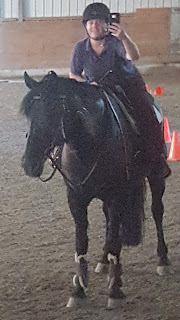 I got a text this morning that a certain dork was doing his best stud impersonation in his field.  Temps are dropping and clearly he's feeling good, so I might lunge before I ride tonight.  I'm hoping today or tomorrow he'll be 100% and I can start to push a bit as we get ready for our next outing.  I'm going to be very careful until we depart on Tuesday.  I'd rather end our season with a bang than a whimper.

Hoping the bang isn't him unloading me due to the weather suddenly short circuiting his brain.