Poor Theo.  I'm a terrible mother.  I talked to Trainer A and we have two things to work on over the next two weeks:


Impulsion has improved mightily over the years, but clearly we need to make sure it's a very conditioned response so it doesn't fail when under pressure.  Leg goes on, pony goes forward.  Over.  And over.  And over.

Until I want to puke.  But that's how a conditioned response is created.  If he doesn't step forward promptly, he gets the little whip tap.  When he does, he gets the neck scritches.  We'll always need to work on this, but we're really going to focus in preparation for our next outing.

The distractions thing made Trainer A giggle with delight and clap her hands.  I've never been squeamish when it comes to torturing my pony in the name of desensitization and I've only gotten worse after our epic bombproofing clinic.  I have zero fear of what will happen when you surprise my horse.  Been there, done that, have the t-shirt.  Trainer A had full license to do whatever she wanted and she frankly needed it.  In his home indoor with people and horses he knows?  Mi papi is not particularly reactive.  He's in a safe place and he knows it.

She threw an empty milk jug around in a cubby where the jumps are kept, so he couldn't see her but could hear her banging around.  She found random equipment to bang against the walls when he went by.  She threw the barrels we use for jumping out of the cubby so they would bang and roll around.  She dragged out a huge piece of canvas and got her dog to ride around on it, tugging and growling, while she ran around the ring with it.  She banged on an empty barrel and sang loudly before rolling the barrel AT my horse while I was cantering. 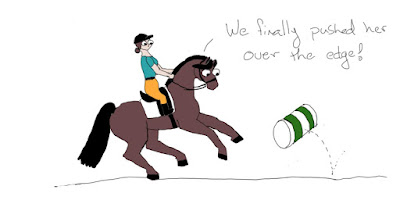 She did it.  She shoved him into that hyper alert state where he starts to spook and stare at everything, even stuff he will usually ignore.  He spooked at a bag on the ground that he will usually pick up and carry around like a puppy.  I then worked him through it while not letting him brace or drop his back or suck back behind my leg.  It was not easy, especially when she started rolling barrels at us from the front and we had to canter by like nothing was happening.  It took a couple tries (and a little spank when he broke to trot) but he very bravely cantered by the moving threat with his tummy tucked up so it couldn't get him.

The reps were more for me than him.  Do NOT grab his face because he's distracted, get in the back seat and boot him along.  He knows how to be on the bit, once he's in front of my leg he goes into the contact just fine.  I know I can stop a bolt within a breath of it starting, so no need to guard against it.  If I want him to march past the scary thing, I can't also hold him back.  Over and over we went past scary, distracting things while I was reminded to give with my hands and get him in front of my leg.  Don't bring the bit back to him, shove him forward into the contact.  He knows what to do once he's there and frankly, he seemed to find the boundaries of the aids comforting.  His back came up.  I know it did because I could suddenly sit the trot just fine.  His hocks and stifles were definitely at work since he was trying to be as far from the things on the ground as possible.

There was talk of recruiting the working students to stand around the outside ring with pom poms and do loud cheers while we run through our test.  No walk around for Theo, just straight up centerline with cheerleaders waving pom poms at C.  If this happens, I will demand video.

After that, the usual spectators should seem utterly boring.
Posted by Catie at 11:02 AM